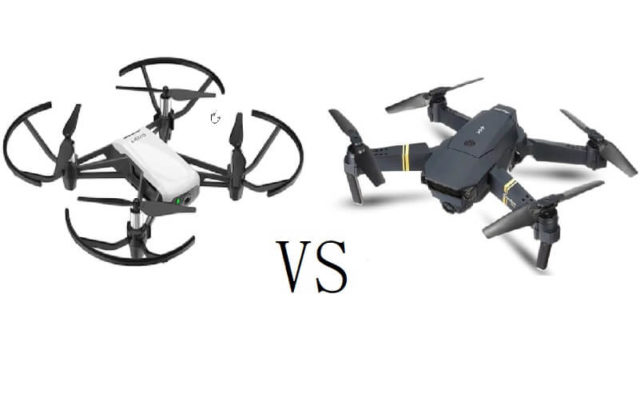 When it comes to choosing a drone, you’ll have multiple options. There are drones with more professional qualities, and others with toy-grade qualities. The two drones we will analyze today are somewhere in the middle. They are the bottom line of each company. Both Eachine and DJI are known for their high-tech, professional drones, but somehow they’ve decided to create a not so great drone, and they called them the E58 and Ryze Tello. Don’t misunderstand me, the drones are great, only they are not that good as a Mavic Pro or an Eachine EX58. The purposes of these drones are to give a teaser for those non-drone enthusiast people how is life with drones. They can be purchased for even a small amount of money, but if it comes to spending your own money you have the right to know what you buy for your money. So the purpose of this Eachine E58 vs DJI Ryze Tello review is to decide which drone is worth it more.

The first impression of the E58 is the small build. The quadcopter has is especially small and compact when it’s folded down. Smaller than you imagine and because of this the drone is very portable and easy to transport anyway. When it’s folded, the E58 is small enough to fit in your palms.

When it’s unfolded it measures around 17 x 15 x 6 cm and weighs 96g, which is great news because you don’t have to register it to the FAA. The drone is built from a massive ABS plastic, which won’t break easily, so it’s a perfect fit for beginners.

The E58’s four props are hinged twin props, which comes useful when you transport it and store it. But don’t worry, when the props are in action and spinning, centripetal acceleration will cause them to deploy outward, and they won’t collapse.

The Tello is also a really small drone, which measures just 6 x 6 x 1.3 inches and weighs 80g, 16g less than the E58. This means that this drone does not need FAA registration either. Most of this weight comes from the battery that has to be inserted in the plastic-covered body of the drone, with the rotors around it. Unfortunately, the Trello is not foldable, so you should take care of it when you’re transporting it anywhere not to break its arms. In the package, you will also find a set of propeller guards that will ensure the safety of your drone in case of a crash.

The remote controller of the E58 is just as well-designed as the drone itself. Overall it looks very modern, and simple very similar to the DJI Mavic controller. The controller is lightweight and fits just right in your hands. You can reach every button easily. The range of the controller is 100 meters.

The controller also has two antennas, but they are not real antennas, they are there only for aesthetic reasons. In order to power the battery, you will need 3 AA batteries which you will have to purchase separately. You can also connect the controller to the phone to get an FPV view. The max range of the FPV is 30 meters, so if you want to watch the live feed of the camera, you should keep the drone close to you.

As for the battery, the Eachine drone has a 3.7V 500mAh battery that is enough for around 9 minutes of flight time.

The Tello also features a really nice and compact transmitter, it’s very easy to use and to hold. The range of this controller is a bit more extended than the E58. The controller can give the drone a range of 100 meters, which is not that much, but for a price like this a fair number.

Also, the Tello can be controlled in three ways: with the remote controller, through the app, or through the Scratch programming interface. The Tello app can be downloaded for free on both iOS and Android smartphones. This way you don’t have to carry your controller with you all the time, and you will be able to see the live feed of the camera. The Scratch programming interface is a simple programming platform, that can be a great way to learn the basics of programming and have fun with your drone at the same time.

The Ryze Tello has a 3.8v 1100 mAh battery that can provide up to 13 minutes of flight time. However, this number can be less depending on your flight style or the environment.

The camera is actually one of it’s best features, obviously for a drone in this price category, you can’t expect much. But the camera that comes with the drone it’s still good enough to take videos and images that will have a decent quality. The camera is a 720p camera that has a 120° FOV. Almost every drone camera has a wide view like this, the angle of the camera can be adjusted from 0 to 90°, so you can get the perfect angle for your photos.

The Tello captures videos also in 720P at a resolution of 1280 x 720 and still images at 5 MP (2592 x 1936). Both are clean and sharp, you can see the details pretty well in bright colors. This drone also has a wide-angle which can help you a lot if you want to record wide landscapes.

Both of the drones work great and the specs are similar. In almost all the features the Ryze Tello is slightly better, but it also costs you more. From this moment it’s up to you how much do you want from your drone. Whether or not you will use that extra 3 minutes of flight time and 20 meters of range.

If you’re interested in the Eachine E58 you can buy it on Amazon, Amazon, or Banggood.

If you’re interested in the DJI Ryze Tello you can buy it on Amazon, Amazon, or DJI store.