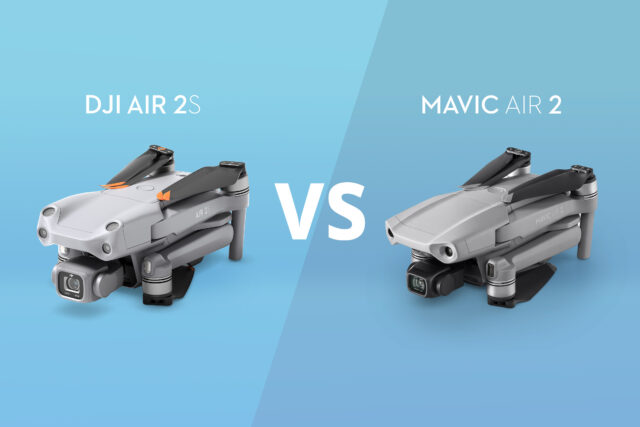 When Mavic released their Air 2 model, everyone wanted to place their order as soon as they could. Nevertheless, DJI did not want to leave the spotlight on Mavic for too long, and only one year later, they also launched their Air 2S model. Mavic took this hit harder than they would have expected, especially because as soon as the word got out about the release of the Air 2S, everyone put their Air 2 orders on hold. So, which one is the best? We will let you decide, after we make an in-depth analysis about the DJI Air 2S vs Mavic Air 2. Hopefully, you will have your definite answer after this.

At a first glance, both the DJI Air 2S and Mavic Air 2 seem pretty similar, or at least design-wise. They are both foldable, are built from a white material and follow the same lines. The only difference is that the DJI Air 2S has an extra pair of obstacle avoidance sensors on the nose, and it also has orange stripes on the edges of the propellers.

It seems like the Mavic Air 2 might just win this category, with its extra 3 minutes of flight time. But how is this possible when the batteries are the same? Well, it is probably because the DJI Air 2S weighs 25 grams more than its competitor.

The DJI Air 2S has the latest OcuSync 3.0 incorporated, that allows for up to 12 km range. The Mavic Air 2 falls a little short here, as it has only the OcuSync 2.0 and an up to 10 km range. While everyone hoped that the DJI
Air 2S will be compatible with the DJI FPV Goggles V2 and the DJI Motion Controller, due to the new transmission system, they were only disappointed. Better luck next time!

This is where the real talk begins. The cameras hold the biggest differences between the two, so let’s see what we are dealing with! The DJI Air 2S is equipped with a 20MP/5.4k 1″ sensor camera, while the Mavic Air 2 has a 48MP/4K 1/2″ sensor camera. It is needless to say that the size of the sensor affects the quality of the footage. To make it as clear as possible, a 108MP phone with a tiny sensor, while appearing to be impressive at first, will never be able to be as performant as a 20MP full-frame DSLR camera. Also, when a sensor is larger, the camera is able to better capture wide angle photos and videos even in low light conditions. Therefore, we guess you can tell which of these cameras is better. In addition, the Mavic Air 2 has better slow-motion capabilities at FULL HD resolution.

Both the DJI Air 2S and the Mavic Air 2 feature the same set of QuickShot modes: Dronie, Rocket, Circle, Helix, Boomerang, and Asteroid. However, the DJI Air 2S has a little extra: MasterShots. With this, the drone flies around on its own while taking 10 to 15 different video sequences of one subject of your choice from a variety of angles. If this was not enough, it then edits these scenes together to produce a complete cinematic video, together with music, and even stylish transitions. What else could you wish for?

As we could all tell by now, the DJI Air 2S has some extra sensors compared to its competitor. The Mavic Air 2 has a 3-direction obstacle avoidance system, while the DJI Air 2S has a 4-direction one. This means that the DJI Air 2S can sense its surroundings in four directions: up, down, forward, and backward. The added sensors ensure safer autonomous flights such as RTH and ActiveTrack. The DJI also has the upgraded Advanced Pilot Assistance Systems (or APAS 4.0) that makes it possible for the drone to autonomously and successfully avoid obstacles even at high speeds and complex scenarios, including the S mode flight. The Mavic also features the APAS, but it is the 3.0 version.

Both drones include the Spotlight tracking software, but the Air 2S has a better and updated version. If you are wondering what Spotlight is, it is a software that locks the camera onto any object, moving or static. Until now, it does not sound like too much of a deal, but the trick is that all of this is happening while the controls of the drone remain to the pilot. Now, do not get us wrong, the version the Mavic Air 2 has is perfectly usable, but the one found in the DJI Air 2S is a lot more accurate.

In conclusion, it might look like the DJI Air 2S is just a step higher than its competitor, Mavic Air 2. While this is a great thing, you should also consider that, naturally, the same principle applies to the price difference. After all, you are the only one that knows which features are important depending on the way you plan to use your drone, and also what are the limits of your budget. After you decide, you can find both models, the DJI Air 2S and the Mavic Air 2 on the DJI store.