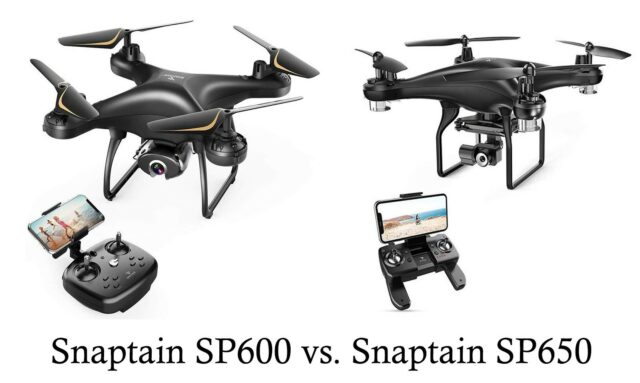 This drone has a very robust manufacturing quality. Made of ABS material, it has strong impact resistance, strong heat resistance, and shock absorption. This sturdy appearance and design mean that your drone will be more durable than you think. The Snaptain SP600 has just the right proportions (12.5×12.5×5 inches), and it weighs only 180 grams, with batteries being easy to handle while traveling. Also, there is high landing gear for emergencies, which means the Snaptain SP600 can survive a minor collision. The anti-collision barriers at its four corners ensure this.

The design is sleek and sturdy. The Snaptain SP600 has lights under each propeller, making this drone more interesting because the LED Lights support visual positioning and more attention to the drone during the flight, even in the dark.

The Snaptain SP650 Drone weighs only 125 grams, and you can easily take your drone anywhere. Its dimensions are 10.6 x 10.6 x 4.4 inches. This drone is also equipped with a high-end ABS material plastic shell. One of the characteristics of this material is its high shock absorption, impact resistance, scratch resistance, and tensile strength. This provides a strong protective layer for the specific internal components of the Captain’s SP650 UAV.

A great benefit of this drone is that it comes with two 3.7V 1600mAH batteries in its package, which means you can have a longer flying time (about 30 minutes of flight time).  The battery is charging in 3 hours, which is a shortcoming of its positive reviews, but for a drone for beginner pilots, it’s not an issue because some drones take longer to charge (up to five hours). When flying a drone, you can monitor the battery level at any time. If the battery level is low, an alert will be issued so that you can recall the device as soon as possible.

This model of drone, Snaptain SP650, comes with two batteries in the drone’s package like its predecessor, Snaptain SP600. Each battery can provide 12 minutes of flight time, which means you have 24 minutes of joy in total. The 1000mAH battery is a step down compared with Snaptain SP600 Drone, but an advantage is that it has an encouraging battery charging time of up to two hours, which is an improvement over its predecessor.

The camera with 720HD resolution and a 120-degree viewing angle is very suitable for newcomers drone pilots. Due to the wide-angle, Snaptain SP600 Drone is very suitable for outdoor shooting. Another outstanding quality of this drone camera is that you can use gesture control for photos and videos.

Due to the fact that the Snaptain SP600 controller has not a viewing screen, you need to use your smartphone and the SNAPTAIN Era app. Using this application, you will be able to share the videos and photos you take with your family and friends on social media networks such as Instagram and Facebook. This drone has other impressive features like: Intelligent Voice Control (basic voice commands), Gravity (it has a gravity sensor, which will help you to control the drone better with the help of your smartphone), and also 3D Flips (stable and fast flips, which add more excitement to the overall experience). In addition, the Snaptain SP600 Drone has a Headless Mode for beginners (the drone’s control remains the same no matter which direction the drone is facing), and let’s not forget about Multi-speed mode (it has 3-speed modes and the maximum speed is 3.5m/s).

SP650 is equipped with a built-in 1080p camera. It can be manually adjusted to face down and up to capture various aerial perspectives. For drone cameras, the quality of captured pictures and videos is surprisingly high. The 90-degree adjustable design and 120-degree wide-angle allow you to capture the moment from the panoramic view. You can capture Full HD video at 25fps and at different speeds with problems. This is an excellent feature, right? The camera on this drone is a bit unstable in windy conditions, but this is a problem that most drones have.

Other fascinating features of the Snaptain SP650 Drone are: Multiple Speed Modes, including high speed; Altitude Maintenance (you don’t need to worry about vertically flying), and Trajectory Flight. The trajectory flight of this series deserves much publicity because this feature means that every flight can be programmed by connecting to a point on the map of our smartphone. In doing so, the drone will be locked on this route, and now you can fly hands-free.

Let’s not forget that the Snaptain SP650 Drone supports micro SD cards up to 64GB, which can easily store several hours of footage at a time. Now you can save on your SD Card multiple videos, and you will be able to stream them on a larger screen or share them with your beloved ones.

Well, it is no wonder that drone pilots love the Snaptain SP600 Drone. This is due to the user-friendly and straightforward user interface and setup that comes with it. Take off and land with one click. This drone can be operated by the controller and the SNAPTAIN Era app (both Android and iOS users can use it). There are no complicated controls, and the most fantastic advantage is that you can enjoy your new drone within a few minutes.

Very easy to operate, especially suitable for beginners. Its responsive controls and controllers are ergonomically designed to reduce cramps. The connection range is up to 80 meters, which is an advantage compared to S600 Drone. The Snaptain SP650 Drone has multiple options like its predecessor (gesture control, voice control, and headless mode), but in addition, it has a new function of “follow me.”