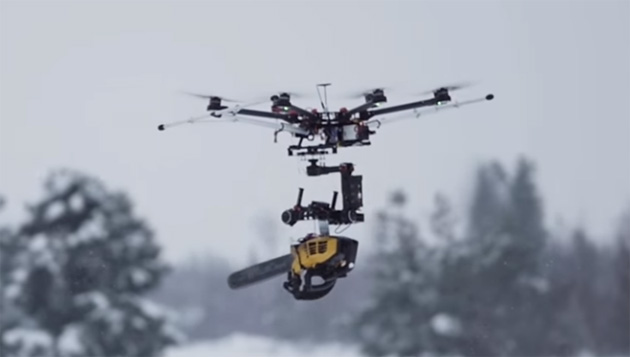 So something has not been seen before – a drone with chainsaw . Incredibly, crazy or just plain dangerous? In this article, you learn everything worth knowing about this Octocopter with a built chainsaw. Fascinating and frightening at the same time.

This is surely the height of madness. Or is it in this Octocopter Tag even to a technical masterpiece? Well, definitely the farmers have come from Finland some. As a basis, a is powerful Octocopter , which can bring several kilograms of additional weight to lose in the air. a chainsaw was placed between the landing gear instead of a camera then. In addition, a unique feature that the chainsaw on the drone pivoted or vertically / tilted horizontally can be. In any case, the hobbyists have here really thought of something and actually create a good working Monster. And of course, there are also to moving image material …

The video for the drone with chainsaw

We have promised you. So hold on tight. The other day we had already this mistaken flamethrower Drone reported that had built a hobbyist from the US itself. Look here now, the Chainsaws drones video :

Whether the Finns this ever a Drones insurance get, is questionable. In our view, this drone has but to offer some positive aspects with a chainsaw – even assuming that the builders of this Octocopters really also what sensible want to do with this drone:

Here is a photo still – to recognize the drone with a chainsaw through fields/forests in Finland.

What ye shall keep it Crazy and dangerous or technical masterpiece Let a comment because here goes straight to the YouTube video.

Your can see KILLERDRONE! Flying chainsaw