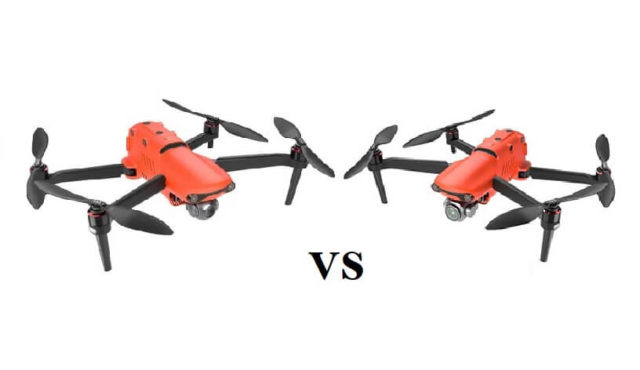 Since the Autel EVO II appeared, numerous users are mistaken for the EVO II Pro 6K and 8K drone. Why EVO II Pro 6K drone is more expensive than the 8k drone? The 8K one is inferior to the 6K? Which EVO would it be advisable for me to purchase? In this  Autel Evo 2 6K vs Autel Evo 2 8K article, all your questions will be answered.

In this article, we will look at all the specs and functions of the two drones. So when you finish reading the article you will find out why the 6K is more expensive than the 8K one, and you will get an idea that which one suits you the most.

As you can see there are a few differences between the two drones. First of all the price, but that’s not all. There are more significant changes between the two aircraft. For these drones, Autel partnered up with Sony to provide a high-quality gimbal camera that can zoom and capture every shot with crystal clarity. And as you can see they both have different resolution cameras when it comes to sensors and max video resolution. And that’s why the 6K is more expensive than the 8K. Let me explain.

The EVO II 6K features a full 1” sensor with an f/2.8 to f/11 adjustable aperture. This is a larger sensor than the one int he 8K, which provides over 4x the light-gathering area. And due to the adjustable aperture, it can capture a wider range of shooting conditions. So even though the 8K camera as a slightly better resolution, the 6K has a better sensor that can make clear pictures even in bad conditions. While the 8K one can take good pictures and videos only in well-lit environments.

Now, let’s see what are other similar functions that both of the quadcopters are able to do. First of all, both of the Evo II series has a full 360-degree obstacle avoidance system. This is done through the 12 sensor camera system that helps the drone observe all the possible threats. The software that uses the sensors is called Dynamic Track. Recently, it got an update, so now you can get these drones with the 2.0 version. The support for the cameras is the same on both of the drones. So you can change the cameras if you have both the 8K and the 6K ones.

The Evo II Series is often compared to the DJI Mavic 2 series. But in many ways, the Evo series is superior. For example, it has a longer flight time, and there is a better digital Zoom on the Evo series. The Evo 2 series also features a big screen on its remote controller. In the case that you need a large screen on your DJI remote, you’ll need to dish out another $700 to get the DJI Smart Controller. Autel likewise doesn’t have the flight limitations like DJI products. On the off chance that you need complete opportunity to fly where you need (dependably obviously). You should choose an Autel drone.

Eventually, the Evo II Pro 6K is a magnificent drone. In the event that you need a drone that isn’t on the DOC substance list, this is the most ideal choice for experts. We have been flying the Evo 2 Pro 6K solely for the most recent couple of weeks so stay tuned for really testing and substance. The hurried pack presented above is a strong arrangement.

The EVO II Pro have a great camera sensor and a movable gap which give you a gives a bigger light-social event zone, But EVO II 8k Drone has a higher goal, 4x lossless zoom, lower cost and can record 8k video.

If you’re a photographer/videographer, a greater camera sensor and the flexible gap will give you better shooting conditions. Obviously, on the off chance that you simply a drone darling or have a cutoff financial plan, EVO II 8K takes you the best flight insight and an 8K camera can give you better picture quality and more extensive scene.

Also, no matter which one you buy, the camera is replaceable later, as the EVO II Series gimbals are tradable, you can undoubtedly trade over the various cameras and gimbals to redesign the EVO II drone to EVO II Pro or EVO II Dual. (8k, expert 6k, and Dual camera are accessible to buy independently)