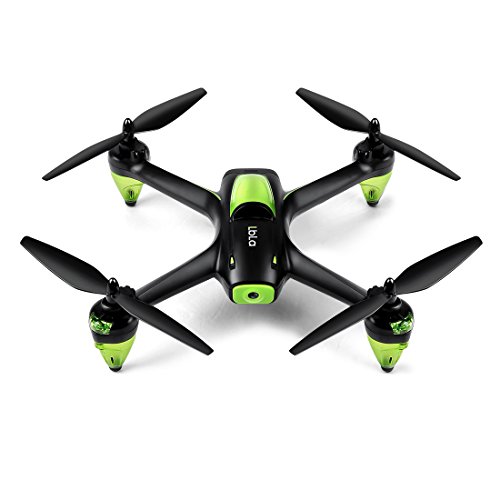 Looking for a drone but you don’t want to spend too much on it? We got the solution. With the growth of the drone market now you can find a lot of drones under 250$, they all have cameras and can give a lot of joy for such a price. Flying a drone requires some skills, but with a beginner-friendly drone like this, you don’t have to worry about anything. It has propeller guards and different flight speeds so you don’t have to worry about losing control. Let’s see the specs of the LBLA RC Drone – Affordable Quadcopter.

First, the drone comes fully assembled in the box. It’s a nice and lightweight drone. The color combination is a black/green combo which is a good combination after all black is always a good choice. The arms are placed on the drone in an X shape. Under each of the motors, there is an LED light to give you information about the front and the back of the drone. But you can turn off the lights whenever you want. Under these, there are some rubber bands to secure your landings. The battery is removable so you can have multiple batteries to extend your flight time. It only weighs 135 grams with the battery.

The RC has a matching color with the drone. At first glance, the RC has a cheap look. It looks like a controller from a console. It has many buttons, each of them is for a specific flight option or other functionalities., and of course you have two joysticks as well. There are no screens on the RC, instead, there are some LED’s to show the info you need to know about the drone. The controller doesn’t have a built on phone holder, you have to attach it yourself. In the box you will find a clip, now that’s the phone holder which you have to place on the top of the Remote Controller. It won’t give your phone a perfect hold, so watch out for sudden moves with your hand.

With the app installed you can even control the drone via your phone, the signal might be a little weaker, but if you don’t have other options you can use it. Also, the joysticks and the buttons on the screen takes up a lot of space and you won’t be able to follow the FPV stream well. But to list you the positive sides of this option, with the app you can have voice command and gyro mode, where you only have to tilt your phone in the direction where you want your drone to go. It won’t be the most effective way to control your drone, but it’s worth trying out at least once in a lifetime.

The camera is only a 720p one. The colors are also not the most realistic on the record. But for an “affordable” drone you shouldn’t expect more. After all, this drone isn’t for professional filmmakers but for drone virgins, who would like to try out themselves.

As I told you before this drone is most for beginners. This fact is backed up by the fact that it has different speed options, so you can start at a low speed until you learn all the basics and you have full control over the drone. The drone has an altitude hold function and can do flips on all sides as well with a single press of a button. Both of them work surprisingly well. But be aware that because of the size and weight the drone can easily be moved by the wind when it’s in the air.

The flight time of this drone is around 9-10 minutes and can fly as far as 100 meters which are average from a drone like this. But if you go for an economical drive, so you don’t use any flight options and don’t record you can extend this time a bit. Don’t forget that this isn’t a GPS drone so it won’t come back home when it’s out of battery. Therefore always be aware of the place of the drone so you can easily find it.

Overall the LBLA RC Drone works pretty well for this price. While the drone is in the range it doesn’t glitch and lags which is a pretty good thing. The camera and the range can be improved but for a price like this, we can’t blame the manufacturer. After all, this is a beginner-friendly drone, mostly for minors, and for that purpose it’s perfect.

If you’re interested you can buy it from Amazon.