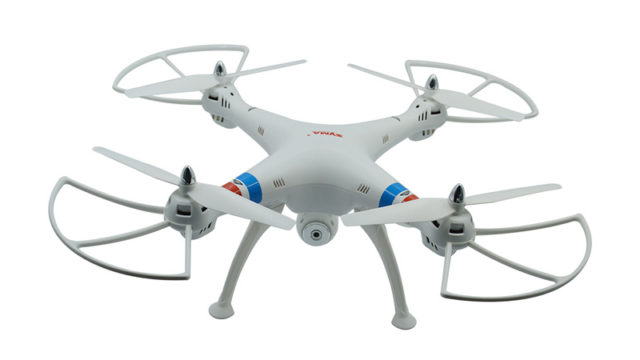 The Syma X8C already seems like quite a popular quadcopter but Syma decided to go further and gave the WiFi FPV version of the quadcopter — the Syma X8W.

The Syma X8W is essentially an X8C but with the addition of WiFi FPV. It has a 2 megapixel camera, while all the X8C lists is an ‘HD camera’. The WiFi FPV enabled X8W looks like a decent buy if you’re into WiFi FPV. The live video from the quadcopter WIFI camera can be displayed on any Android or iOS mobile device using the Syma FPV app.

Besides the WIFI FPV camera another great feature is the lifting capability. It has enough power to carry a GoPro and a SJ4000 camera.

As the previous model, the Syma X8W will be available in 3 colors: black, white and orange.

● With WiFi camera, can transmit the live image to your phone.
● With headless mode function.
● The 6­axis system allows the quad to be hand launched.
● 6­Axis gyro quad­rotorcraft flight, strong stability,can easily implement various flight
movements, stronger wind resistance, easier to control.
● 2.4 technology adopted for anti­interference.even more than one quadcopter is flying at
the same time they will not interfere with each other.
● The quadcopter can fly both indoor and outdoor.Including 4CH digital proportional RC
system.
● Function: Video/Photograph/Raise & Down/Forwards & Backwards/Left & Right
Turning/Left & Right Flying/Hovering/360 Degree Rotating.