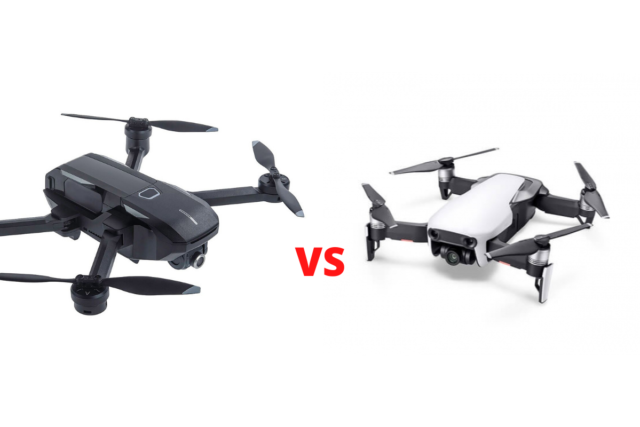 DJI has been on the top of the camera drone business for years. When we talk about camera drones there are more categories, there are more professional ones like the Phantom 4 PRO and fewer professionals, but more affordable ones like the Mavic Air. But is there a weak spot among the drones offered by DJI. In this article, we will compare the Yuneec Mantis Q which is not a well-known drone but is a well made one, for a more affordable price. We will find out that the DJI really worth that much or they are successful because of the brand. Let’s start the battle between the  Yuneec Mantis Q vs DJI Mavic Air.

Both of the aircraft are foldable and have an unfolded size of 6.6 inches, which makes both of them a perfect choice to travel with. They won’t take up much space in your backpack or suitcase. Until this point, we’re even. However the Mantis Q weighs more with 0.6 pounds, this isn’t a big difference but somehow DJI managed to build their drone with slightly less weight. Is it good or bad? Well, taking into consideration that the Mantis Q has some metal in his build, therefore, it’s more resistant to crashes I think we can forgive them for the small surplus.

Both of the drones are able to capture videos in 4K at 30 FPS, which is great. However, there are still some differences between the two cameras. The Mavic has a 1/2.3″ CMOS sensor and 12MP of effective Pixels, while the Q has a 1/3″ CMOS and 13MP effective pixels. Regarding the gimbals, the DJI drone has a 3 axis gimbal for Pitch, Roll, and Yaw.

The Q has only support that can reduce the movement from the Pitch, but it has a software image stabilization, which works only at 1080p if you want to capture with 4K with the Yuneec you have to fly very slow without any sudden movements. Because no matter how good of an editor you are, you can’t make a shaky video to look good. But back to the similarities, both of them can capture in 4:3 and 16:9 ratio, and both can provide footage only in JPEG and DNG.

In the flight time stage, the Mantis Q is the absolute winner with 33 minutes of flight time. But in the flight range the Mavic is the winner with his 2000 meters, while the Q has a control range only of 800m (The FPV ranges are the same). However, the flight experience doesn’t stop here because it’s not only about the quantity but the quality as well. Talking about the speed the Yuneec drone can fly at 48 mph, and the DJI product that we’re talking can fly with a little less speed of 42.5 mph. The DJI Mavic Air has obstacle avoidance sensors which will help you a lot if you’re a beginner in drone piloting. In the case of the Q, you’re on your own.

But let’s talk about control as well. Both of the aircraft can be controlled with mobile phones (each of them is available for both Android and iOs), gestures and the good old remote controller. However, the Mantis Q has a small plus, because it can be controlled with voice as well. I’m not saying it’s a really useful feature, but it’s a fun thing to have, and also it’s a good thing to show off in front of your friends.

But the Yuneec can work only with a 5.8 GHz frequency, while the Mavic air supports 2.4 GHz as well. This means that you can control the Q with your phone only if that supports 5G. Both of them have around the same features for capturing videos, I’m talking about the modes like follow me, point of interest, etc. With these features you don’t need to have any special piloting skills, you just enable these features and you will have amazing footage in just a few seconds.

After all, we have a really tie result between Yuneec Mantis vs DJI Mavic. They both won some of the “rounds”. So, after all, it’s really up to your preferences. On the side of the DJI, we have years of experience and hard work, but they grow so big the DJI name that fans would buy it just because of the name, and they can easily take advantage of that. On the other side, we have an underdog with less experience with a smaller name. That means that they have to work twice as hard just to provide a good drone for the market. They don’t have that big of a name in the industry, and they have to lower their price to be able to make some profit.

So there isn’t any right answer for the question Yuneec Mantis Q or DJI Mavic Air? No matter which one you will choose you to have different pros and cons, neither of them will last forever and for both of them, you need to have good piloting skills in order to make good footage. The only critical thing that decides which one you should buy is the price. If you listen to your wallet you will choose the Mantis Q, if you take care of him it will last longer and you will get a reliable camera drone that can last for years.