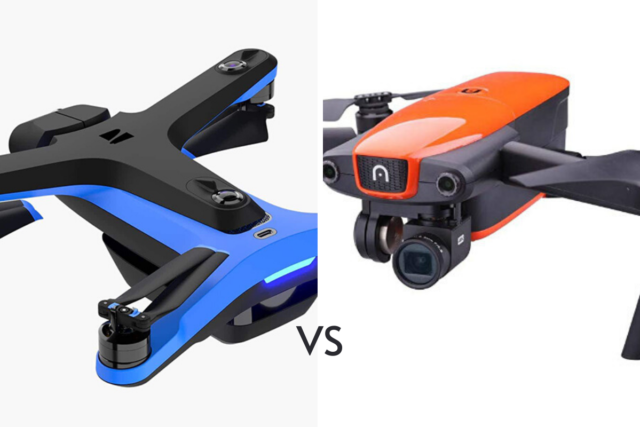 If you know a bit about the drone “industry” you might’ve heard about these drones. They are some perfectly built, amazing drones. But most importantly they could be a big threat for the DJI semi-professional drones. They both can record in at least 4K, the Autel is even capable of 8K. And besides this, they have a lot of flight features. But let’s take a deeper look inside the Skydio 2 vs Autel Evo 2 race and let’s decide which one is the best candidate to take down the DJI from the drone throne. As usual, we will look at the 3 most important aspects of a drone, the design, the camera, and it’s performance.

Let’s start with a small history lesson, because as you can see this is the Skydio no. 2. Therefore it’s a 2nd generation model, it’s 50% smaller and 50% lighter than its predecessor, also the battery works 50% better too. So as you can see we have really serious competitors who do everything to satisfy the needs of their customers.

The drone is enabled with 223 x 273 x 74 millimeters propellers, two out of which are facing downward and two are facing upward. This offers the drone better flight, more stability, and better performance. The drone has an overall weight of 775 grams without the battery so you will definitely need an FAA registration for this. Which is good because a drone with these metrics is no joke. You have to take this power seriously.

The Autel EVO 2 is a foldable drone, having such a design makes it easier to travel. The drone’s quite heavy, and it might cause you some difficulties carrying it around. Talking about concrete metrics it weighs 1.127Kg. The drone comes in a bold orange color, it’s not the most elegant color but it’s a cool one.

The camera featured on the Skydio 2 is a Sony with 1/2.3” 12.3MP CMOS sensor with an f/2.8 aperture that’s equivalent to a 35-millimeter. Having a high-quality sensor like this on your drone’s camera can be a handful if you want to record at a high speed. With this camera, you’ll be able to record video at 4K resolution and a frame rate ranging from 24 to 60. This will enable you to record realistic footage at a whopping 4K resolution. In 1080p, you have the possibility to record at frames per second from 30 to 120.

The Autonomy System enabled by the great camera and image processor represents the drone’s whole navigation brain. Combined with the Nvidia Tegra X2 system the drone can track as much as 10 objects at the same time. All this is possible while avoiding walls, trees, and any other obstacles even at full speed thanks to the AI and machine learning algorithms that power up this gadget.

The drone has a built-in 8GB storage, but if you want to record in 8K, that 8GB clearly won’t be enough for you. Luckily there is a slot for a microSD card where you can upgrade the storage to 256GB.

The performance of a high-quality drone like this can be a really important factor. Whilst the R1 featured average flight performances, the Skydio 2 quadcopter showed in our review can attain very satisfying results for half the price.

It has a 4,280 mAh battery which lets the Skydio reach as much as 23 minutes of flight time on average. This makes it better than the average but, if you still want to have the all-around flying experience, you can always buy some extra batteries. Due to the lightweight and powerful motors, the Skydio can fly at a maximum speed of 36 miles (58km) per hour in the right conditions.

The drone doesn’t have as many intelligent flight options as a DJI drone. You will find only the basics of this drone. The intelligent flight options on this drone are the following: return home command, altitude hold, etc. But if you want something fancy like an orbit mode like footage you will have to perform it yourself, which with a little bit of practice won’t be so hard cuz you have a lot of sensors.

As we saw in our Skydio 2 vs Autel Evo 2 comparison, the Skydio weighs less, but the Evo has a foldable design, so for the Skydio you will need a case if you want to transport it more easily. As for the camera, the Evo 2 has an incredibly good and unique 8K capable drone. But it doesn’t have all the flight features that a DJI drone usually has. So they still need a bit of improvement if they want to be the best.