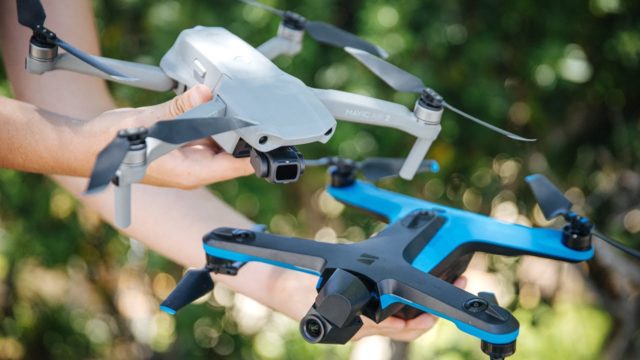 Air 2S vs. Skydio 2 is the main topic on everyone’s lips lips these days. Let’s get deep into details and see why.

Air 2S and Skydio 2 are both great obstacle avoidance while they are tracking a moving object. In fact, these are kind of drones that are well known for this type of feature called tracking. Besides this, these drones also have  incredible visual sensors and are able to  assess its environment and decide where to go next.

But what’s the main differences between them and what should you expect from both of them? Well, this is an Air 2S vs. Skydio 2 topic that will answer all of your questions and doubts and will help you to make a decision about what will be your next acquisition. Let’s check it out.

The DJI Mavic Air 2 drone is a kind of successor to the original Mavic Air but improved. Actually, it is considered to be a transition from its initial form into a true Mavic drone. It is also the first consumer class  drone that offers an ADS-B receiver. The Mavic Air 2 is a mid-tier drone in DJI’s lineup. Also, when it comes to size, price, and capability, the Air 2 is somewhere between the Mavic Mini and the Mavic 2 series drones.

In the same manner the Mavic Air 2 is a great and well done update in the camera department. And this is because of a new 1/2 inch sensor that shoots 12MP stills, but you can easily capture 48MP stills as well.  To be honest, the 12MP shots are better because of the Quad Bayer technology. You can take incredible photos but what is more exciting to many users is the new 4K video capture at 60fps, and a data bit rate of 120Mbps.

Skydio 2 is one of my favourite models and it is an improved version of the impressive Skydio R1. The power of Skydio drones is in the Nvidia Jetson on-board computer but also in an array of obstacle avoidance sensors. Moreover, this model uses six cameras, with a 48MP of resolution, for obstacle avoidance purposes, which makes it one of the safest drones around, in terms of avoiding a crash. They offer free repair or  in some cases replacement if your machine happens to crash or has a problem.

The Skydio 2 cameras are 4K standard and shoot at up to 60 fps. It is definitely a class-leader in follow-me modes and it also offers additional control options. You can control Skydio 2by using your smartphone, just like the earlier models, or you can choose the new remote control or the Skydio Beacon, which will give you some control of the drone by acting as a wireless tether, to ensure that the drone follow you even when it can’t see you.

You can see in the video below a comparison between the two models which was made by the creator DCRainmaker. So check out the video because it’s worth watching.

The truth is the Air 2S will never see the big picture in the same way the Skydio 2 can and this is mainly because without  having the obstacle avoidance sensors, the Air 2s model can be literally basic and the same as other Mavics. Air 2s and Skydio 2 are not equal when it comes to tracking. But do not be sad if you already purchased an Air 2s. Don’t get me wrong, according to the review I made before, the drone has excellent features, and it is compact for travel or for a picnic day in the park.

The decision to buy one of these depends on the purpose you want to buy and mostly what you want to accomplish with that drone.  If you expect long-range flight, low-latency transmission, and a ton of non-tracking automated features, go for the Air 2S. But if you’re getting ready to bike along a canal or down a mountain trail, I think that you might be happier with the Skydio 2.