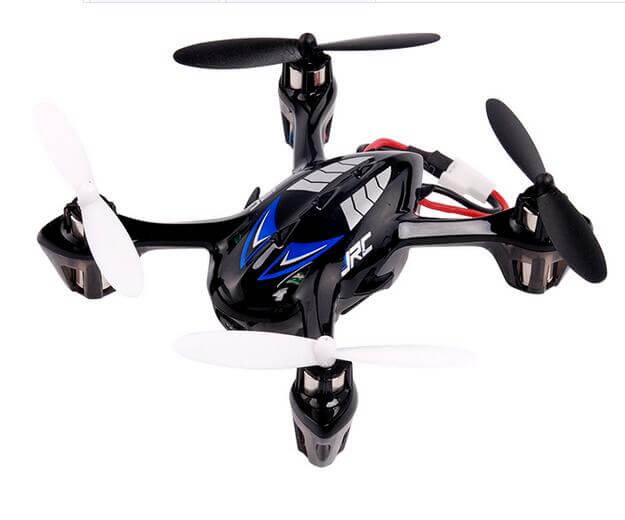 The JJRC F180 Quadcopter is a small, toy-grade drone that has some really nice qualities. First of all, it’s a 6-axis micro quadcopter that has strong stability, thus beginners will find it very enjoyable to pilot. It’s also one of the most affordable quads produced by JJRC in his category. Unfortunately, it’s not a camera drone, but it can be purchased even for the simple joy of flying a drone. Also, the F180 can be an ideal quad for those who already have a large drone, but want a smaller one for training purposes.

At first glance, you may notice some similarities between the JJRC F180 Quadcopter and the Hubsan X4. The motor, propeller size, and body dimensions kinda look the same. However, besides the similarities in the design, the F180 is still unique in some ways, mainly in how it flies. The drone is made out of ABS plastic, which is quite a durable material, and paired with the propeller guards the drone will be almost indestructible.

With all these safety features, the company still managed to keep the drone light, weighing only 38g with battery and prop guards, the JJRC F180 Quadcopter is one of the lightest drones you can get. This means that you won’t need any kind of registration in order to make the drone fly.

The prop guard on the F180 is quite flexible, which means it won’t break easily. Also, because it covers the drone in a 360-degree radius, it provides very good protection not only for the propellers but also for the entire quad.

Unlike most drones that you can get under $100 category, the F180 comes with a 2.4GHz 4-channel transmitter. The remote controller also looks pretty professional, and it has a mini LCD screen for displaying telemetry information. Thus you can see the throttle position, flight modes, battery power, radio reception, and throttle trim. This is a nice feature to have and some high-end drones don’t have such a screen implemented in the controller. That’s another thing that shows how good this drone is.

As the first step, you need to power up the controller, then it has to be connected to the drone. For this, you should turn on the transmitter and then move the left throttle stick up and down. You have a LED light to show when the transmitter is completely bound. Before the binding is successful, the LED is blinking, after that, it will stop blinking.

You also have a speed controller on the transmitter. It has four different speed profiles. The first level is the easiest, and if you have never flown a quadcopter, you should start on that one. At the last speed “gear” the drone becomes pretty fast and aggressive. flies more aggressively.

The battery for this drone is a small 3.7V 300mAh Li-Po, but due to its lightweight, it doesn’t even need more power. One battery will power up the drone for like 7-8 minutes, depending on your flight style, and whether or not do you have the propeller guard installed on your drone. To fully charge your drone it will take about 45 minutes. So in less than an hour, you’re ready to fly again with your JJRC F180.  The battery is a modular one, so you can change it easily if you got more battery.

Overall, the F180 is easy to fly and stays stable in the air. It reacts really fast to the responses and has a yaw rate that is faster than other models. Considering all these, we can say it again that the drone is one of is really beginner-friendly.

Other than the smooth control, the drone can do some tricks as well, like doing flips.

The direction of the flip can be set. But before doing anything make sure there is enough space for the drone to perform its flip. After you secured yourself, press the dedicated button for the flip, and then set the direction with the joystick.

If you’re looking for a small drone that flies well and you won’t have to rob a bank to get it, the JJRC F180 Quadcopter is a perfect option. It’s a well-designed quadcopter, that is small enough to fit in almost any backpack. Other than this it has a very stable and enjoyable flight that you will surely enjoy. You can also do flips with it if you want to. The controller is just right for the drone, it fits just right in a human hand and it also has an LCD screen. On the screen, you can see the information that can come useful during your flight.