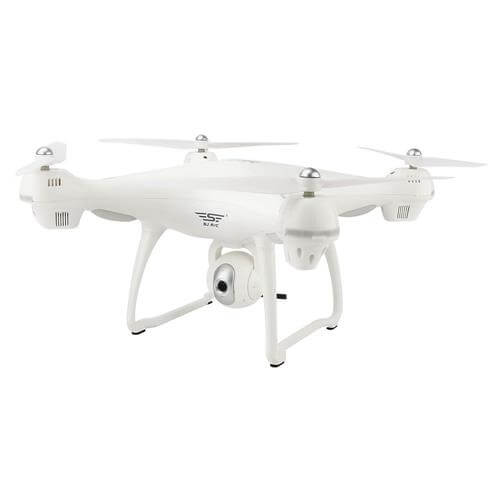 SJRC S70W Quadcopter is definitely a drone that will capture your attention. It comes at an affordable price offering a decent number of flying features that makes it deliver a smooth flight experience. This drone has a 5 mp camera which will help you capture great photos and recordings, along with GPS stability. So, if you are curious about finding out more about this drone, read this article until the end.

SJRC S70W comes with a very professional and futuristic design. This will also be the first thing you will notice when you get to see it for the first time. It looks pretty similar to the popular DJI Phantom series. The drone is available in two colors, white or black. In my opinion the white one looks better.

Even if it looks very similar to the DJI Phantom drone, when it comes to performance you can not compare them. But, taking into consideration its price, the SJRC S70W is a really good drone. Being a quadcopter it has 4 rotor arms, each one of them ending up with a motor that will help the drone to offer a stable flight. An interesting aspect about its camera is that it is situated below the drone’s main body. This way you will get a very wide angle that you can use for capturing your impressive recordings and photos. Below the drone you will also find its landing legs. These legs do not only help the drone get a smooth landing, but they are also great for protecting the drone’s camera from getting hit.

Inside the drone’s package you will find the drone itself along with its 2500mAh 7.4V battery. More than that, you will also find some spare propellers, the transmitter, some spare landing skids, a micro USB cable and the user manual.

A great aspect about its packaging is that it comes with many spare parts. Usually, drones do not come along with spare parts. Having these parts you can easily use them for replacing the used ones if needed and you will also save some money.

When it comes to flight performance, the SJRC S70W offers a decent flight. It has a GPS system included, which helps the offer a smooth and calibrated flight. It is very responsive and its remote controller is easy to understand and use. The drone performs decently even in windy conditions. Due to its GPS system the drone can perfectly perform the return home feature. So you will not have to worry about losing it. Simply, press the return home button and the drone will come back to you by itself. The drone has a decent top speed of 25km/h, which is not something impressive, but it might be enough for a drone to start with.

It is powered by a 2s 2500mAh lithium battery. It will offer a total amount of flight time of around 15 minutes per charge. Its batteries are modular ones, so you can easily switch them between when one of them is out of power. In order to get a longer flight time, we recommend you to purchase more batteries.

Even if the company claims that the drone will offer you a distance range of 400 meters, it is not true. Because in reality you will get somewhere around 100 meters, further than that you will not get a proper wifi signal. Of course the drone can go a little further but there is no point in flying it further if you can not use its camera.

Overall the drone’s camera is not an amazing one, it will not offer you the most impressive and professional videos of course. But, at this price we can say that you can capture some decent photos and some good aerial videos with it. Unfortunately the camera does not come along with an image stabilizator, so you might get some shakened photos or videos.

In conclusion, the SJRC S70W is neither the best nor the worst drone that you can find on a market. Taking into consideration its price range, this drone is a decent one. You can use it to practice, learn and improve your piloting skills. It is also a great drone to offer as a gift to somebody. So if you are interested in purchasing it you can find it at a great price on Gearbest, at the following links: link 1 or link 2.