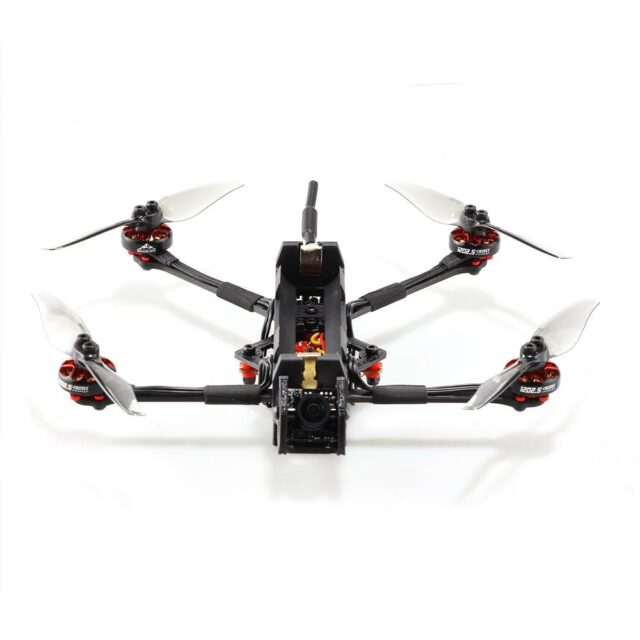 The Rekon 3 is a new long-ranged FPV drone. The company is best known for their miniature size 4 “and 5” long-range cruisers, which have barely sufficient burden ability to convey a “bare GoPro” so you can in any case take fun video chronicles with it. But now with the Rekon 3 Nano Long Range FPV Drone they put something new on the market. On of their biggest competitor is the recently reviewed FlyFox Nano 3, that has the same characteristics and a similar look as well.

The Rekon 3 is fundamentally utilizing 1S ultralight assemble segments and it’s anything but a 1202.5 11600KV engine, 3″ props, and a 1S Whoop style FC. Clients have been exploring different avenues regarding 18650 cells on these forms for various years at this point, yet it was as of late made famous by Dave_C with his novel casing plan that utilizes a 18650 battery holder.

The other element of the Rekon3 is utilizing a different VTX that offers a respectable reach. It can give you over 1km to 1.5km alongside Crossfire Nano recipient and a high limit of the Li-Ion cell.

What I have here is the PNP form which doesn’t accompany a beneficiary. Out of the container, the Rekon3 has a link for associating with Frsky collectors.

Every one of the segments is associated with the FC – an AIO outshines style board. There’s is no outer BEC, capacitor, or LC channel. In the first plan, there was a 5V advance up to control the VTX, nonetheless, HGLRC disclosed to me they didn’t require it in the Rekon3. The arms are exceptionally thin (1.5mm thickness) and not the most solid edge. Be that as it may, there’s a 3D printed outline plan on Thingiverse, so you can feel free to print substitution outlines when it breaks.

The Rekon 3 is a lightweight 3″ FPV drone planned around a solitary 18650 Lithium-Ion cell as its force source. Making this work is very surprising on the grounds that Li-Ion cells have an extremely low release current for driving quadcopters, also it’s just utilizing one single cell.

Flying the Rekon3 out of the container, I was arbitrarily losing video. It gave the idea that the VTX restarts at whatever point I move to choke excessively fast. I checked with HGLRC and they revealed to me they didn’t have such an issue in their testing. However, another analyzer of the Rekon3 is additionally having a similar issue and he was utilizing the suggested Sony VTC6 battery.

To investigate, I took a stab at utilizing a LiPo all things being equal, no more video quitter, so that guides the issue toward the force source. Since they are not utilizing a 5V advance up voltage controller, I chose to have a go at adding one for driving the VTX. Also, prepare to have your mind blown. That fixed the issue! No more VTX restarting, the video was acceptable the whole flight.

Out of the box, Betaflight and BLHeli settings are not streamlined. Clear things like voltage cautioning and least voltage ought to be set a lot lower (2.7V, 2.5V), yet they were totally left at default. Also, they ought to have streaked the ESC to 16.9 and utilize 48KHz PWM recurrence which is more proficient since this quad is about flight time.

To give HGLRC some credit, however, Bi-directional DShot and RPM channel are now set up, PID is by all accounts blocked out of the container also and it flies okay. Furthermore, SmartAudio turns out impeccably for changing VTX channels and force.

Note that the camera is NTSC so make a point to place OSD components in the right part of the screen so they don’t get cleaved off.

When endeavoring to streak the ESC to BLHeli_M (v16.9), the ESC’s by one way or another got bricked (not reacting any longer) after a “Streak Failed” blunder. So I needed to re-streak them through the C2 interface and it was relentless. At times when I “Read Setup” just a few ESC appear, so it appears to be those ESC aren’t the most solid on the planet. Perhaps a terrible unit I got.

The Rekon3 is really lightweight even with a solitary cell 18650 at 114 grams, yet it doesn’t have a lot of force at all and is very lethargic. It drifts at 55% choke, is simply not implied for free-form and acro. Envision flying a small outshine with a 70% choke cap, then, at that point add some more weight to it, that is the thing that it seems like.

It can do some basic flips and rolls, however, it’s intended for cruising around.

The Rekon 3 could be a decent preparing quad for fledglings since it’s little, not amazing, and safe. It’s actually peaceful and covert, it doesn’t trouble others.

All things considered, the arms are dainty (1.5mm thick), so they are not made for slamming. It’s anything but a couple of hits on grass since it’s lightweight, yet it will not endure a lot of maltreatment on concrete.

Flying with Li-particle 18650 in the Rekon 3, I have been advised you can release the voltage down to 2.5V to utilize all the accessible limits.

I realize it conflicts with what we were educated, to land when the voltage arrives at 3.5V, however that is for LiPo. For Li-Ion, it’s permitted to go lower, and in light of the fact that it’s under load, you will get some voltage to hang particularly for batteries of such low C-rating like Li-Ion cells. At the point when you see 2.5V-2.6V and land, it will recuperate to around 3.1V-3.3V (or much higher). In any case, you should explore different avenues regarding the battery you have, and figure out what’s the base voltage you should land.

If you’re interested, you can buy the Rekon 3 Nano from Banggood or GetFPV.