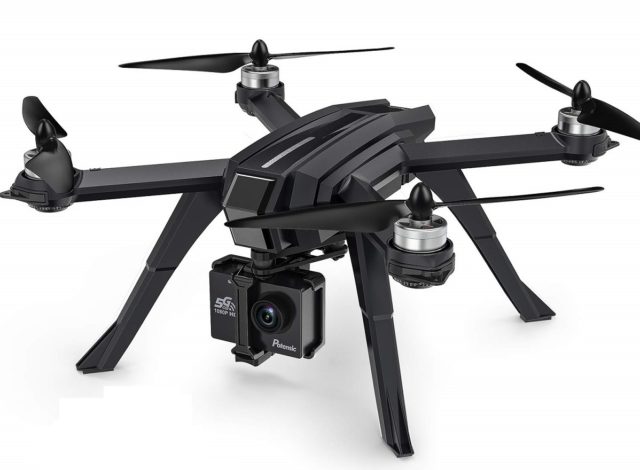 Nowadays more and more people are buying drones to impress their social media followers with amazing aerial photos and videos. Those kinds of photos are closer to you than you might think and you may consider to do it too because drones are becoming more and more cheaper. They come for a good price and features that are making your drone flying experience easier than ever. If you want to record your holidays from a unique perspective you might consider something like the Potensic D85 Quadcopter.

The drone has a good and fresh design and some pretty amazing features. No, not only expensive drones are coming with good features. You can get yourself a pretty amazing drone for a relatively cheap price. This one has brushless motors, is built for long flight time, has a wide-angle camera and many more. It has a lot of safety features so your age and skills don’t matter here. Flying isn’t an extreme sport anymore. Manufacturers try to make easy as possible flying a drone without damaging anything or anyone.

The drone has a powerful and a little scary look. Maybe it’s just me but because of the long legs, it looks like a spider. Anyway, the drone has a strong look with stylish black color. Above each leg, it has an arm that holds the brushless motors. The legs are giving protection to the camera and the bottom of the drone so the big legs aren’t just scary, they are useful too. The drone is pretty massive and heavy, it weighs 525g. Because of that, it can survive extreme conditions and it won’t crash if you hit it a tree. But it’s better if you don’t try this.

The fact that is has a brushless motor it gives him a lot of advantages. First and most important brushless motors live way longed then brushed motors. And if you buy a drone you want to work as long as possible. The second advantage is that brushless motors are way quieter, it still has some little noise, but you won’t get complains from the neighbors about your loud drone.

However, we still suggest removing the background noise from the camera if you edit a video and use some proper music. And last but not least they are more powerful. Having a brushless motor can give huge power to drone. This way it’s faster, more stable, and more resistant with external conditions then the brushed motors. So if you want to buy a drone make sure it’s a brushless one. Trust me.

The Potensic D85 Drone is built with a camera from the manufacturers. The stock camera is already pretty good because it can capture in 1080p. It can take beautiful and clear footage. But for the happiness of the GoPro fans and users, it can be changed with any other sports camera that fits in the spot, like the Hero7. So if 1080p isn’t enough for you and you want to have the best footage possible you can upgrade the camera anytime for a 4K camera.

The controller is black, has a good grip, is built with buttons and two joysticks. The buttons are very intuitive and easy to learn the meaning of them. As any other FPV drone it has a phone holder as well. With that, you are able to see the drone’s camera live. The 5G capability gives an extraordinary live transmission to the phone so you won’t miss anything important. And the best part is that the range from the controller can be 1500m which is a huge distance. However, the 5G Wi-fi will work only for the first 800 meters. But the great range recompenses that.

Because of the 2800mAh Lithium-polymer battery of the drone, it will have a longer flight time than the average. The flight time of this drone is 20 minutes which is can be even double more than in the case of some drones. And this battery is a “smart battery” which means it will alert you if you go on a critical battery level.

If you’re not impressed about the Potensic D85 Quadcopter by now this section will amaze you for sure. This drone has a lot of features, some are safety features, some of them are linked with the flight experience and some helps you to control the drone easier. So this drone isn’t for just the beginners, it will give a lot of fun for the more experienced drone users as well.

The most satisfying aspect of the drone which is the most dangerous as well is his speed. This drone is able to fly with 52 km/h. This is possible because of the brushless motors and the chipset of the drone. However, if you are a beginner try to use the drone as lower speed first. Because flying at a high speed can cause serious damage in the drone and others as well. Just like driving at high speed. For that I highly advise to master the control of the drone, it will take only a few hours and make sure that you are alone as possible in a wide outdoor space.

The drone is also able to fly in “headless mode”. When this feature is enabled you can fly the drone in every direction without knowing in which direction is the done headed.

Like every other expensive drone, this one is able too to hold its altitude. So with this feature, the drone won’t fall down to crash if you let go the controller. But this feature can do so much more than that. Having this option in your drone you can make clearer photos of yourself and others as well. Your photos will be as stable as possible.

The Potensic D85 Drone has some safety features as well like the drone will return automatically home (home means the point where he takes off) when you are very low on the battery or when you went too far and the drone is not in range with the controller. So if you become too excited and forgot about the drones limit he will take care of itself. This way it won’t fall down and won’t land in a lake or something if you lost control. Still, you can enable this command for the drone to return home with a pressing a button on the remote as well. So after you got bored you won’t lose long minutes by landing the drone properly.

Beside the FPV you can use your phone to draw the route of the drone. This feature makes easier to control the drone and sending into the best place you want it to be. It’s a great tool because you can get more precise photos and it’s fun to use it. But there is another feature in this category. If you want to record a moving object or person you can enable the “Follow me” mode. You enable this feature by tapping on the moving object. And being able to fly on high speed it can follow even faster objects as well while it within the 1500m. Read the users manual to use these features appropriately.

The Potensic D85 Quadcopter is a perfect budget option. It’s not cheapest but it has a very affordable price. You get most of the features you can find in a more expensive drone. It’s good for beginners and even more experienced users. And with the camera updated you can take professional videos with it. It has a long-range, long flight time. If you want to buy a drone and have the budget for this one I highly recommend to buy this one.

You can buy the drone from Amazon.