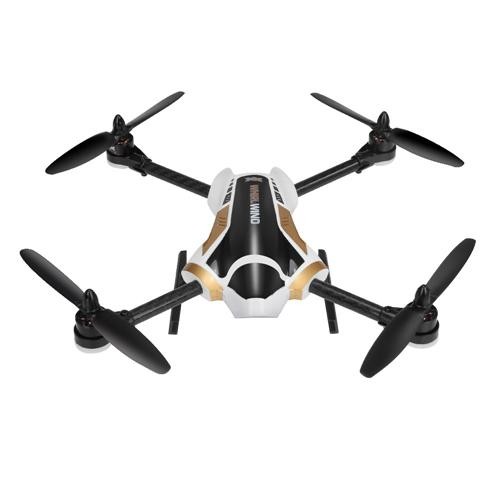 The XK X251 is a new mini quadcopter with powerful brushless motors, which will let you fly with incredible speed. If you are looking for a swift little quadcopter, then this XK X251 Racing Quadcopter Review is made just for you. The drone can be upgraded with various accessories and to give you even more fun during the flight, and you can also make it into a cinematic drone if you attach a sports camera on it.

The drone has a bit of a spaceship look with his futuristic design. Due to this fact for me the drone looks a bit childish, it’s like a plastic toy that you buy for your kid, from a Chinese store. But I don’t wanna hurt anyone, if you’re a big sci-fi fan and you like it I don’t have any problem with that, this is only my personal opinion. The body has a unique white-gold color, which could be helpful to find your drone if you land it somewhere unintentionally. All the other parts including the propellers and the bumper are black, which matches good enough with the other colors on the drone.

The drones’ body is made from plastic which is durable enough to withstand minor bumps and crashes. Although, if you crash it at full speed the chances are something is going to need repairing. But that’s not that big of a problem until the hardware inside is harmless you can buy a spare part for only  $15! However, try not to crash it if you can. On the bottom of the drone, there are some LED lights that will help you identify your quad even when it’s dark outside.

The drone doesn’t have its own camera still you can attach one to the drone, like a DJI Osmo Pocket if you have the correct accessories for that. This action camera has a great stabilization system. And if you connect your phone to your action camera you will also get an FPV view where you can follow the position of the drone anywhere should it be. So with a great motor that this drone has and a good action camera you will be able to make amazing shots.

The controller is quite bulky and a bit complicated. Which is both good and bad. It’s good because it means that it has a lot of options, flight modes, etc that you can choose from. And the bad part is of course that it’s quite complicated to use it. But if you give enough to the process to learn it, and we advise you to do that, you will be able to make amazing things with it. Also, the remote controller is so powerful and needs so much power that it works with 6 pieces of an AA battery. The transmitter also has a holder on the back so when you put it on a flat surface it will stay at a 30-degree angle. And it also has a little circle in the middle so you attach a hanger on it.

The drone comes fully assembled in In order to get this quad in the air you just need to attach the battery and then to start the motors. The drone has a range of 300 meters after you won’t be able to control it, considering the price this is a fair range for the manufacturers. However, how small is the drone it’s not even advised to fly further than that because you won’t be able to see it. The distance between you and the drone will be shown on the remote control, so you don’t have to worry about accidentally flying out of range. Thanks to the 7.4V 950mA lithium polymer batteries and its lightweight build, the XK X251 is able to fly for around 12 minutes, depending on the conditions and your flight style.

It’s truly amazing how fast it was able to fly around, the brushless motors provide it with so much power that you most definitely could not fly indoors, or even in a small yard. And having a brushless motor doesn’t just give you more power, but it’s even more durable than a brushed one. The drone is so powerful that you will be able to control it even in windy weather. If you haven’t flown a drone before, I recommend trying it out in a pretty open area like a field or park.

The original version of the XK X251 has a full acro mode, which has since been replaced with ‘ratitude mode’ in the hopes that the XK X251 would be more beginner-friendly. When rattitude mode or stability mode is activated, the drone still makes use of its 6-axis gyro stabilization. However, when the joystick is pushed fully in one direction, you will give an order to the X252 to perform an acrobatic flip.

Overall the XK X251 is a fantastic quadcopter as shown in this review, with great value for money and is the perfect transition between toy-grade copters and hobbyist level drones. It has its good and bad aspects as well. His good points being the powerful motors which make it able to fly with great speed and the fact that it has enough space to attach various attachments to it. But the flight time, along with the range is quite disappointing. I think those aspects could be improved. But as I said it flies really well, it flies fast and it’s quite quick to respond to your commands so it’s one of the most fun drones around.

If you’re interested in buying one, or just want to check on the price you can do it on Gearbest or Geekbuying.