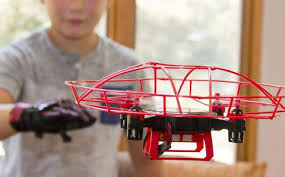 This drone is one of the most advanced and fun toy drones we’ve reviewed on this site. All of us loved star wars, or at least the idea to be a Jedi and to control everything with our mind. Well with this drone you will get a taste of how that should feel. Unfortunately not by the Power but because of modern technology. The Aura Quadcopter that we’ll review in here requires much practice but the propeller guard will give him protection not to break anything around you.

It’s a nice and small drone without anything extreme on its body. The drone is lightweight as you would expect with a drone that is made specifically for entertainment. There is an LED light on the front for easier orientation of the drone. There is no power switch on the drone, instead, you have a wire that has to be connected from the battery to the drone.

This is an inside drone, it’s a bit dangerous to fly the drone inside, especially when you have a controller like this one. But luckily you got a Prop guard provided so if you hit the ceiling it won’t cause any damage.

The batteries 3.7V Li-Po 500mAh are located underneath the main body and they are secured by the landing gear. The batteries are removable, which is a good thing when all you have is around 6 minutes of flight time. But lucky us they charge up pretty fast, it only takes half an hour to charge them, so you don’t have to wait for that much before the fun begins again.

As you know there is no actual controller for this drone, at least not a usual control. You will have a glove for that, so everything may seem that you control everything with your hand. The glove you have various options and you will have 3 LED lights that turn different colors when the drone is in different flight modes.

The motion-based sensor is attached to the provided glove by two straps, one goes above your thumb and one goes under. Also, you have some buttons as well on the device, one is for auto take-off and landing and you will also find one power switch on it.

And a few words about the actual controlling. You will have a detailed description in the users manual but we would like to give you a taste. So when you tilt your hand the drone flies forward, and backward tilt flies it backward. Tilting the hand left or right makes the drone go sideways in the direction you just moved your hand.

Aura is a lot of fun and a challenge to fly. It takes a bit of time to figure out how the controls work. Due to its small size and weak motors, it won’t make any rush movement so it’s a pro for you if you’re a beginner. It only flies in an extremely small range, so it’s limited to indoor use only. However, you can fly it outdoors as well but you will have to be sure there isn’t any wind out there.

Due to its small size, lightweight and weak motors the Aura doesn’t do that well against the wind. Also, having only an 8-meter flight range kinda limits you out there, and you won’t be able to go too further. And let’s remind ourselves that it doesn’t have any camera so there is nothing you can capture with the drone. So you better stay inside with it. But Everything else works great on the drone. You can execute tricks with it, and the drone is very stable if you fly under the proper circumstances.

But as for the other features, the Aura doesn’t really impress us. There are many other drones that have a camera, and some features for that for the same price. Having a camera and an FPV takes your drone piloting to another level. But honestly, I don’t think there’s any need for it really. This drone has targeted the kids who have their imagination, and don’t need special gadgets in order to satisfy their needs.

As for adults who wish to use a drone for capturing aerial footage, there are a lot of options when we talk about budget camera drones, like the Parrot Anafi. And this drone remains for the purpose of doing tricks and it does them really well. But let’s say something positive as well about the drone because this aircraft has gyro stabilization and altitude hold which will help a lot the youngsters and the beginners to control the drone.

The Aura Quadcopter from our review isn’t the most beautiful but it is not his main purpose. It has a very light built which helps you fly the drone with a maximum of accuracy. Controlling the drone isn’t that easy, it takes a lot of practice to learn how things work, and a little time to master it. The battery provided to this drone can give you only around 6 minutes of flight time, but the battery is removable and you can change it if you have a separate one.

There is no camera on this drone, but instead, you have other features like flips, altitude hold, etc. Not to mention the fact that it can be controlled by a glove. I think it would be cool if they would collaborate with someone to create a drone with a camera, a regular controller and a glove controller. Until that, if you’re interested in this drone you can order yours from Amazon.