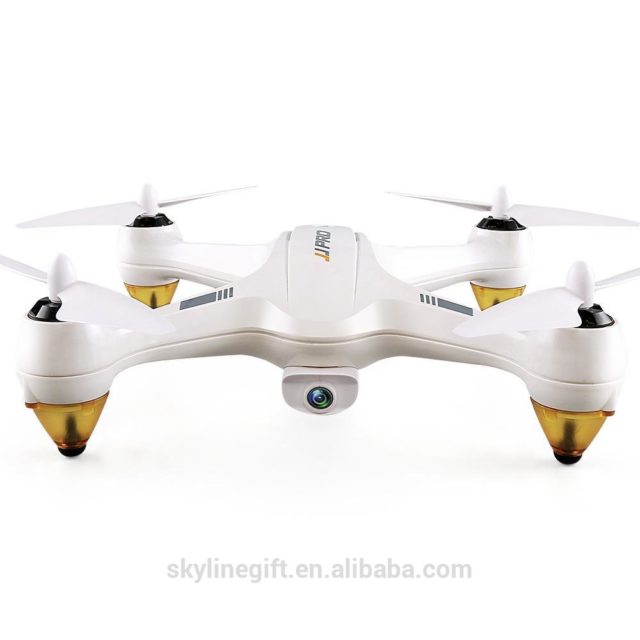 People are often wondering which is the best entry-level drone? But the answer is depending on what you look for. If you want a racing drone you should skip over this review, but if you need a nice cruising drone with a good camera and GPS positioning system, this JJPRO X3 Quadcopter review is just for you. It has anything that a drone rookie might need. As I said the JJRC X3 that we’ll further review here it’s a GPS quadcopter which is really useful, it has a return to home feature, a good camera and decent flight time. So you won’t be disappointed

The drone has a white design which could be very useful in a bunch of situations. Having a drone that has an outstanding color will let you find your drone easier if you execute an emergency landing. The overall design of the drone is rounded, and it doesn’t have any special design on it, so it’s a perfect choice for the minimalist fans out there

The battery provided for this drone is a  7.4V 2000mAh battery which will give you 15-18minute of flight which is depending really much on your flight style.

The controller provided this drone it’s not the most ergonomic. It’s quite bulky and has a lot of buttons. In order to use it properly, you will have to hold it with both hands. It also has a screen in the middle which provides you a lot of telemetry information such as altitude, distance, and speed so you could be in full control of the drone.

In order to use the FPV feature on the drone, you will need a phone that is compatible with 5G, so it has to be a newer phone. If you don’t have such a device maybe this drone isn’t for you.

The camera is a 1080p camera with a bit of fisheye effect. Compared to other entry-level GPS drones, the JJPRO X3 comes with a Full HD camera instead of a lower quality HD camera. The 1080P camera allows recording videos of 1920 x 1080 pixel resolution at 20 fps. The interesting fact about the camera is that it’s removable. There is no other camera yet that you could attach to the place of the camera. Maybe if you attach a sports camera, such as a GoPro Hero or a DJI OSMO. But in those cases, you have to be careful at landing not to damage the camera.

The footage taken with the camera can be stored in both on SD card and your phone. You can insert the SD card into the drone by removing the camera and you will find the slot for the SD card. In my opinion, you should use only the SD card to save your footage. I say this because the video/image can be glitchy if you go near to your FPV limit and your footage will be useless. In the case of the SD card, there is no such thing.

The motors handle the drone really well. It responds quickly to all of your commands and the speed is really acceptable as well. Considering that the drone is produced in China at your first flight attempt it might take a little longer for the drone to connect on the satellites. But after the first time, it will be much faster.

By the default settings, the drone has a geofence that you can turn off if you want. This fence will restrict your drones’ flight range. The maximum it will go will be 300m far away and 100m in altitude. If your drone goes beside this range it will automatically return home. If you are at the beginning of your drone career or you just fly your drone in a crowded place it’s recommended to use this feature.

However, the worst part about this drone is the absence of intelligent flight features. So if you want to make a good video you’re really up to only your skills and nothing else.

At the beginning of this JJRC X3 quadcopter review, it seemed to be one of the best drones to buy under $150, but the lack of intelligent flight modes and the compatibility trouble with some older WiFi phones is quite disappointing. Anyway, for this price, we really were expecting some deficit in it. After all, there is no perfect drone. You can get it from Gearbest.