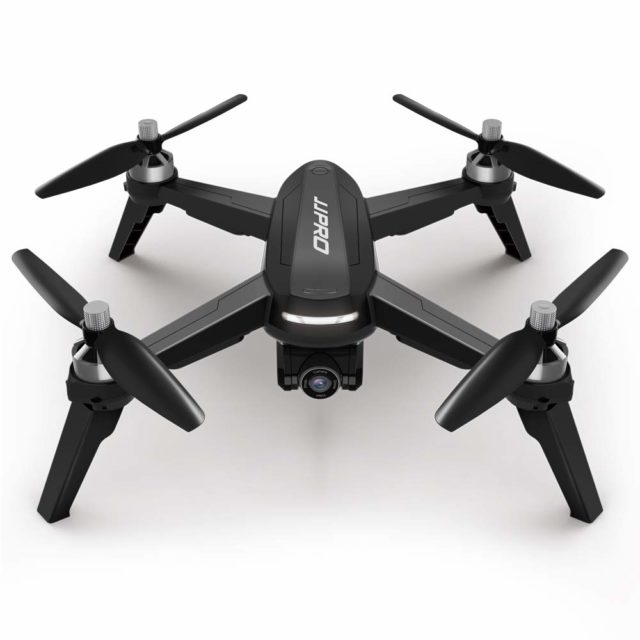 As time passes by the drone market is becoming more and more diverse, with a varied product range all of the manufacturers are coming out with smarter drones for cheaper and cheaper prices. So if you are wondering about buying a drone this is the perfect time to buy yourself a drone Also, you can have more and more expectations from these drones because they have more intelligent flight options, which are good options if you want to take awesome aerial footage. They also look cool, but the best part is that you can buy a good drone for under 250$, so if you’re looking for a new hobby then you have found it.

If you found yourself in the situation of searching for a good drone then you’re in the right place because JJRC came out with a great and affordable drone in the person the X5. He is capable of incredible flight options in a really good package. But to show you how great this drone is, stay with me through this JJRC X5 Cheap Quadcopter Review.

The drone comes in a nice box, at the back of the box you can see all the intelligent flight options the drone is capable of. And inside the box you will find the following items:

So as you can see you’ll get anything you’ll need for this drone.

The drone looks as simple as possible. It has a small body made out of solid plastic and four arms coming out of them. The size of the drone is 35x35x35 cm and it weighs about 400 g which is really optimal. At the end of the arms, you’ll find the motors and under each motor, there is a bumper so the landing won’t hurt your camera. And under each arm, there is an LED light to show you the front and the back of the aircraft, and to be more visible, even at night time.

The color of the drone is a perfect choice, that silver look gives him a professional and stylish look. At the top, you can see the company logo in pretty big so you won’t forget it. At the bottom there is the camera that is removable, the camera is adjustable electrical, so don’t try to adjust to manually because you can break it very easily.

The camera is placed on the front of the drone and it’s a 1080p camera. In fact, for this price, this camera is more than good enough. You can capture awesome video footage with it, and all the footage taken with the camera will be clear with good contrast. To be honest, there are even 2K cameras on other drones that are taking more awful footage than this one.  The camera has a bit of a fisheye effect, which has its pros and cons, but it’s really up to you like it or not. The quadcopter is also FPV capable.

And the camera uses a 5G connection to your devices so your live feed will be clear. However, the feed will live for just about 250m, after that you won’t be able to see what you’re recording. And another bad news, after you’ve gone too far the App has disconnected from the drone you will have to go close to the receiver in order to reconnect the app to the drone. The camera angle can be changed anytime during your flight. The camera will stock your footage on the SD card inside the camera.

The controller needs 4 AA batteries in order to work, and it looks pretty much like a Bugs controller. Don’t let them fool you, the two “antennas” on the top are fake and they are there just to make a good impression. You’ll find such basic buttons on the controller like the Power button, the Take-Off button, the Return Home button, and the Camera button to take photos and videos. These are on the top, on the bottom you have 3 switches, one for GPS, one for Headless mode and the On and Off switch. Between these two sets of buttons, you’ll find the 2 throttles to control the drone.

On the very bottom, you have a small screen with useful telemetry Infos like height, distance, satellites and battery status for both the RC and Drone as well.

To turn on the drone you’ll have to turn the little switch on the battery. Then a short noise will show you that the drone is turned on. The JJRC X5  has a built-in GPS to have a smoother flight but to calibrate the drone you’ll have to do the specific “calibration moves”. Drone users already know what I’m talking about, but if you’re a beginner between the drone users don’t worry, just follow the instructions given to you. The drone will be able to fly for about 18 minutes. The drone also has some safety features, as it will automatically return to you if the battery is about to run out or you’re close to the max range.

With the JJRC X5 app, you won’t just be able to follow the camera transmission but you can use several intelligent flight options as well like Follow Me mode which is pretty useful if you want to make remarkable video footage at any event of your life. But don’t expect stable and uninterrupted footage. Another useful flight mode is the Orbit mode, a.k.a. Circle me mode. When you enable this feature you’ll have to select an object and the drone will start to fly around and around that object.

This feature gives you amazing shots as well, without having good controlling skills, and you can also set the distance between you and the drone, so your footage can be just as you want it to be. The drone is also able to execute the waypoints “trick”. With this feature, you select the next point on your phone’s screen where you want your drone to go next. And last but not least, the Return Home function, I bet most of you guys already know this feature. Basically you just press the Return Home button, and your aircraft will return to his first landing point, therefore you don’t have to mess with the landing.

As you can see from this review, the JJRC X5 Quadcopter is able to do anything you can desire from a drone. The camera quality is good enough for any user up to a mid-level. More experienced drone users, who make their living out of capturing with a drone will buy something like the Mavic Pro, but for a person who uses a drone for his hobby, this is a perfect choice. The drone is made from solid plastic so it will even survive minor crashes. Don’t waste your money and time for a nano drone, buy this drone from Amazon, Gearbest or Geekbuying.