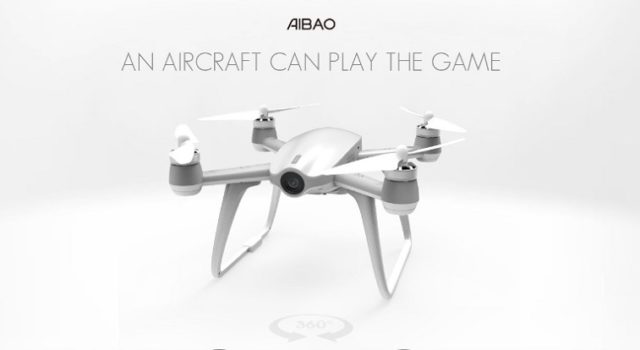 This drone is meant to be the best FPV drone for gaming. This might sound weird, but the manufacturers came out with a real game-changing idea. They merged the reality with virtual reality so you can have a lot of fun using this drone, and not just because of the specs and not just because of the joy of the flight. You can name this drone also a cheaper version of a DJI Phantom. This might look like an insult but to be compared to one of the best drones out in the market is a pretty good thing. Of course, it doesn’t have the same specs, but it compensates us with its unique app. Let’s take a deeper look into the drone in this Walkera Aibao FPV Quadcopter Review.

Inside you will find the following items nicely organized:

At first look, some of the people might confuse this drone to a Phantom, the white elegant color, the nicely designed frame, and the big bumpers definitely give you the impression that you’re flying a Phantom. Also, the controller looks as well a bit like a Phantom’s, but we’re going to talk about that later.

The drone weighs 2.2 pounds and it measures, the drone was built in a way that the propeller and motor can utilize the full power without draining the battery too quickly, thanks to the advanced manufacturing techniques used by Walkera to produce high efficiency, powerful gaming drone. The drone is made from plastic and can be purchased with three possible colors: white, black, and beige.

The 300mAh battery in the transmitter ensures a longer, safer flight when flying, also it lets you fly up to 1.5 kilometers. The signal amplifier that is built-in aids this battery function, which can slightly drain the battery depending on how long you need to use it.

The drone itself has a 5200mAh which will get you 18 minutes of flight time when using the cartridge battery, but if you want to be out there for a longer time, you can always just switch to an additional battery pack, so there’s that.

The drone comes fully equipped with a 4K HD camera that includes 16 megapixels and can shoot both 720p and 1080p HD videos. Videos can be recorded at 25 FPS in 720p and 60 FPS in 1080p. The drone doesn’t have a gimbal, but if you fly smooth enough you can be able to make smooth videos.

Overly the drone was made for its video quality not to take photos. Therefore the lag on the transmission is very small, so you can play the games without any trouble. The footage taken by the drone is stored on a micro SD card which has to be inserted in the drone.

One of the best things about this drone is the fact that it doesn’t need AA batteries. This is because it has a built-in one, which means that you will save up a lot of money.  However, you have to be careful to always have a remote charge. Besides this, the controller has a nice and ergonomic touch. All the controls switched and everything is very intuitive. It doesn’t have any screen to show you the info you might need to know but you can see those on your phone. Therefore the controller has a phone older on it.

As I said in the introduction the drone has a special feature via you can play VR games with the drone. You have to apply for the drone, one is for the standard live feed, and one is for the game. You have the QR code and the link for each of them in the user’s manual. This all sounds good, doesn’t it? But it has a really big defect. It only supports iOs devices. Maybe this is the main factor why this drone isn’t so popular. I don’t know why they chose to send out the drone-like this, but it’s a big mistake. So sorry Android users. If you really want to use this drone to its full potential you will have to buy an iOs phone which is 5G capable. The app has 3 kinds of games:

Besides this, if you have an iOs based phone you will clearly enjoy this drone. The response time is very good, and the drone can fly pretty quickly. Also, the drone is enabled with some features as well, like GPS mode, where the drone will hover in the air in the same position until you give it the next order. It also has orbit mode and other cool features for you to be able to make awesome footage with the camera.

The Walkera Aibao FPV quadcopter from our review works great, and besides that, I called just a cheaper version for a Phantom it can do much more than you might think. The motors, controller, and features work exceptionally well. Together they make a drone that you fly with joy. However, it has a big fault, it supports only iOs based devices. So unless you don’t have an iPhone or an iPad it’s pretty much useless for you. The games that come with the app, are really fun and can be enjoyed for a long period of time.

If you’re interested you can buy the quad on Amazon.