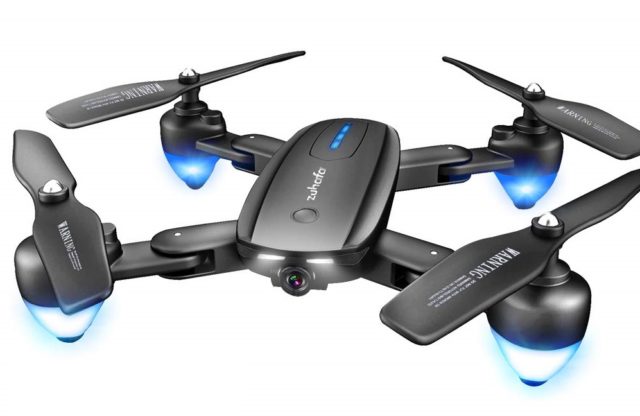 With the growth of the drone market you can always find a drone that fits your requirements, and it’s also quite affordable. For example if you’re looking for a small camera drone, that it’s affordable you have the Zuhafa T4 Quadcopter that we’ll review in here. It’s not just a compact drone but the drone has some built-in features to make your videos more exciting, for example in the app you can add music in the background of your drone videos.

An awesome and handy feature. So if you wish to become noticed on social media this drone will help you, you can edit and share all your footage on social media with the app provided to this drone. Besides the app the drones build is also really good. For example, it comes with a dual camera, a steady build, foldable arm. So basically it has everything you need for a low-cost drone.

The drone is a well designed simple drone with not too many decorations. The whole drone has a nice matte gray color and it has an LED light under each arm so it looks just fine, especially in the dark. But that’s not all, because the drone is built out of light and strong ABS plastic that’s not going to fall apart at the first crash.

The Zuhafa T4 is a foldable drone, this way it’s easier to transport and to store it. Due to its small size the package that you get will be small too but don’t worry, it is only small because the drone is foldable. In the package you will get a carrying case that ensures the safety of the drone when you transport it.

You can see how customer-oriented is the Zuhafa manufacturer because the drone comes with not just one but two batteries. The battery given to you is a 1800mAh one, and one of them will get you about 20 minutes of flight time. If you’re an experienced drone pilot you should know that this number is influenced really much by the environment you’re in. The fact that you get a spare battery enables you to charge one while you’re using the other. However the charging time is quite much, around 2-3 hours. So before a flight make sure that they are charged, so you can use the batteries to their full potential. Also, if you wish you can buy even more battery to add some flight time.

The Zuhafa T4 quadcopter comes with two cameras just like the Aviator 8811. One main camera on the nose, and the secondary on the belly of the drone. The main camera is a 1080P camera that records crisp videos and images. The second camera which is located on the belly of the drone can record in 720P resolution. You can switch between the two cameras in the app. However, if you want to have matching videos try to reduce the footage from the main camera to 720p, to be more natural. The drone has a built-in anti-shake feature which stabilizes the image as much as possible.

As you saw in the introduction you get some hot audio tracks that the drone comes with. You can add them in the editor function of the App which is available for both Android and iOs.

The App can also be used for FPV (First Person View). However the FPV transmission over the Wi-Fi is only 50 meters, so after that you’re on your own, so better keep a visual connection on the drone all the time.

Here are the features that will help you fly this drone and make amazing footages.

You may know this feature as Follow-me mode. When you enable this mode, the drone recognizes you and follows you from a distance of six feet. This way you can record yourself without messing with the controller. It’s a handy automated feature that is handy if you’re a vlogger or a content creator

The name is self-explanatory, the drone will stay at the height you have flown with. Without having your hands on the controller.

In this mode, you can use your hand as a controller. You can execute only some basic features, but it’s really cool. So when you wave your palm forward, the drone will fly in that way. When you wave it right, the drone goes right, and so on.

With a simple press of a button the drone can make flips in all of the directions. It’s a cool thing to show of in front of your friends.

This is a handy safety feature, if the drone runs low on battery, or got bored from piloting you just press the button designated for this feature and the drone will land on the point where it took of.

If I have to describe the Zuhafa T4 Quadcopter from our review is some keywords I would say: small, smart, advanced feature, beginner-friendly, cheap. Because this drone knows all the basic features, a drone might know and you can get it for a small price. The drone suits more the beginners, so it might be a perfect gift idea for the beloved ones. Everyone can learn fast how this thing works, and the drone is so massive that it survives even minor crashes.

If you’re interested in purchasing the Zuhafa T4 you can buy it from Amazon.

Or if you’re looking for spare parts, check out Amazon too.