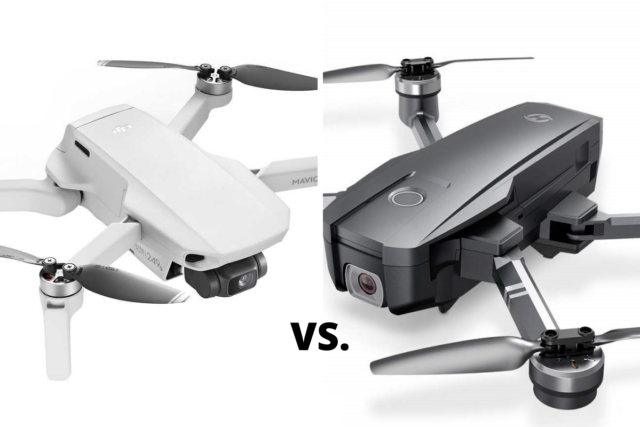 This comparison article isn’t made to decide which one is the better drone. Well, all know, without a doubt, that the DJI Mavic Mini is superior to the HS720, but it has a higher price as well. However, still many people want to compare these two drones, due to their similar size and specs. The Mavic Mini is the DJI’s smallest and lowest-priced drone and comes with many of DJI’s innovative technology, however, there are some lacks as well in the drone. While the Holy Stone HS720 is one of Holy Stones most advanced drones, which costs less than $300. So the real question is that DJI’s most inferior drone, can compete with a mid-ranged developer’s high-quality drone, it other words DJI Mavic Mini Vs Holy Stone HS720, which one does worth it more?

Design is not a problem at these drones, they both look amazing. And more than this they both have a foldable design, which makes them more practical and easier to transport.

The DJI Mavic Mini is a tiny and sturdy drone, that lives up to the DJI name. The drone itself is so small that it fits in the palm of your hand. It weighs less than 250g, so you don’t need any FAA registration in the UK, Canada or the USA.

Besides its size and weight, the drone comes with powerful brushless motor motors, and GPS features, which will keep the drone stable in the air.  many powerful features, it has advanced brushless motors and a dual GPS system that will allow it to hover more precisely. The Mini also comes with sensors optical and infrared which can help him in the orientation. So even indoors you can fly it safely because the sensors will prevent a crash.

The whole system is powered by a 2.400mAh lithium polymer battery which can give the drone a 30 minutes flight time. The time can be influenced by a lot of things, so the time can be reduced by about 5 minutes. But the final time is sill something incredible which makes it one of the best drones with the longest flight times. The range is also something amazing, the drone can fly 4km for its controller, which is also very well built.

The Holy Stone HS720 is also a nicely designed drone, with a premium touch, despite being a relatively cheap drone. The HS720 comes with a nice carry case included in the package as standard, so it’s easier to store and transport. The drone also brushless motors, which is not a usual thing at the Holy Stone. The drone itself It’s a much bigger and heavier than the Mavic Mini. The HS720 weighs 460g, so you’ll have to register it to the FAA for legal reasons. This also has a GPS system that will help you to follow the drone more accurately on your phone, besides it has flight features and an optical flow sensor for better hover. This one has a 7.4v 2800 mAh lithium polymer battery will provide 22 minutes of flight time plus, minus.

The controller for the Holy Stone HS720 also well-designed juts like the drone. But it has less range than the Mini. It only has a range of 900 meters. The controller is powered by 2xAA batteries.

The Mavic Mini comes with a 2.7K camera, that can record at 30fps or 1080p at 30fps. The camera is placed on a 3-axis gimbal which stabilises the footage, so it won’t be blurry and shaky. The camera has a 1/2.3 inch CMOS sensor that captures images in 12MP. However, it can make photos only in JPEG, which is a disappointment to professional photographers.

The Holy Stone HS720 has a decent camera, which is better on paper. It can capture videos in 2K and photos in 4K. The lens is a wide-angle FOV and can be adjusted 90 degrees remotely. This one has a 1/3 inch CMOS sensor and the quality is pretty good regarding the price. For recording, you must use a micro SD card a good one. The videos are decent, but unfortunately, this one doesn’t have a stabilisation system.

Despite its size and weight, the Mavic Mini handles surprisingly well the windy conditions. It has 3 different flight modes, and with the highest tier, it can reach a 30 mph speed. However, it doesn’t have flight features, in fact, this is the only DJI drone that does not come with intelligent flight modes. But it has 4 pre-programmed flight modes called QuickShots, these will allow you to take cinematic shots hands-free.

On the other hand, the DJI has a better app, called the DJI Fly app, this was developed specifically for the Mavic Mini. It doesn’t have features like the DJI GO App, but it has a simple and easy user interface. So even beginners will learn how to use it.

The Holy Stone HS720’s main advantage is the presence of intelligent flight modes. The HS720 has features like follow me, waypoint and orbit, these are especially handy if you’re a beginner or if you don’t have someone to control the drone, while you’re filming yourself.

In addition, the drone has an automatic return to home feature, which can be activated from both the app or remote controller. This feature also kicks in when you lose the connection by going too far, or your battery is going down. This way you won’t lose your drone.

The App for the HS720 is not that well developed. The app is called the Ophelia Go app, and if you use it, you may observe that the screen sometimes freezes up when you are using the FPV feature.

After all, if you have the budget, I would definitely recommend buying the DJI Mavic Mini. It doesn’t have flight modes, but you will get used to the controls. On the other hand, the Holy Stone HS720 is also a very good drone, especially for its price, and it somehow better for a day to day usage. It has intelligent flight features which make it easier to use, and a carrying bag, so it’s more comfortable to carry around Holy Stone is one of the best budget-friendly drone brands and the HS720 is one of their masterpieces.

On Amazon, you can find a great price for both the DJI Mavic Mini and the Holy Stone HS720.

© Copyright Best Quadcopter
Posting....
We use cookies to ensure that we give you the best experience on our website. If you continue to use this site we will assume that you are happy with it.Ok