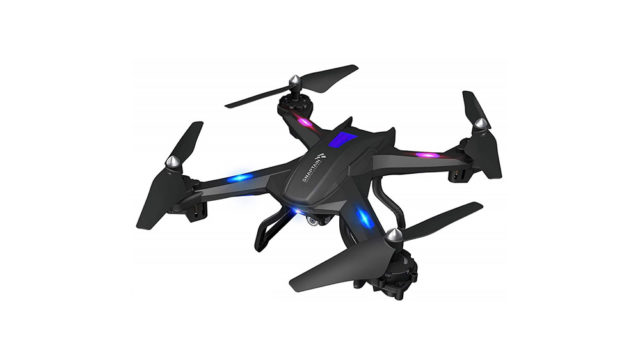 Most of the people are disappointed because they can’t find a drone with a good price and awesome features. Well, those days are over because the guys at the Snaptain came up with the brand new S5C drone that we’re about to review. A machine that is attractive, cheap and can keep up with the more expensive ones. And you may get even more fun with this one, just read until the end.

This drone may be the perfect choice for those who want to purchase their first cheap drone because it’s easy to control and it looks good. It can do a lot of things and if you crash it, you won’t have to regret it because it’s cheap. It’s a great choice for the more experienced drone users as well. For those who want to upgrade their basic drone to a better one, with a camera, and wants to experience the fun part of a drone.

The drone itself weighs only 299 gram, and a has a small size (32.7x 24.6x 8.3) so you can transport it easily. It has lithium polymer 3.7V 550 mAh batteries, which you will find in the box and you get a reserve as well. So as the time you use the drone you can have one battery charging. Each battery will let you fly for 9 minutes. Because it is so easy to use and it is really harmless you can use it at the age of 10 and up due to the manufacturer words. The drone already comes assembled you only need to install the battery and you are ready for the take-off.

At first look, you will see a very professional done with a nice and elegant black color. It’s made out of plastic but that won’t affect you in any way because it doesn’t affect the look and it’s a quite massive drone. The only disadvantage is that you won’t be able to use in windy conditions, so you should only use the drone in nice weather.

The drone is set up with LED lights at the arms, two blue on the front and two red at the rear ones. It has a purpose to help you define the front from the back, mostly in the night time. And it also has a cool effect in the dark.

The done is built with four anti-collision barriers. The purpose of that is to make the drone tough enough for collisions. Especially on the four corners where the propellers are, where is considered to be fragile. So, it won’t be a problem if you fly in a wall or something with a low speed.

The drone comes with a 720p camera which can take photos in a wide-angle and captures a lot of background. Well is not the very best camera out there, which is OK for that price. But, don’t worry you will be able to take quality pictures with this camera as well. If you want to stock your photos and videos you will have to buy and set up the drone with a microSD card. This way, you don’t have to worry about losing your favorite moments captured.

The drone is equipped with an FPV feature which means you can connect the drone’s camera to you Android and iOs phone. You can supervise the photos and videos taken with the drone. However you won’t be able to take photos from very far. The range of the drone from the controller is only 80 which is not the worst, but it would be nice to have a longer range. Maybe in the future.

The controller looks a bit unprofessional, with its black body and blue joysticks. But this means it is easy to use and even a child can understand the aspects on the controller. The remote is easy to hold, and the buttons and joysticks are very responsive. The controller feels good and solid in the hand, and it’s powered by 3 AAA batteries. They are not included but you can find some in any shop. It has a smartphone stand which is necessary due to the fact that the drone is FPV.

Another great function is that when you became bored or the battery is over you have a one-key function to return the drone back to you. You only need to press the specified key and the drone comes back wherever you should be.

Let’s start the most fun and exciting part because nowadays can do so much more than just flying and taking videos. Maybe the most used feature of the drone is the trajectory flight feature. That means you can plan the route of your drone on your phone. Just think about what aspects you want to catch and then just draw a line on your phone and the drone will go that way.

Due to its altitude hold and the built-in 6 axis gyroscope, the drone can easily maintain his altitude and the position of the aircraft. So you can make more clear photos and videos.

But that’s not all. There is more feature that helps you take good photos. Neither of us wants to take a professional selfie with his drone with a phone or a remote controller in his hand. Which fully understandable. That’s why when you are 2-3m apart from the drone and you show a “V” sign (peace sign) with your hand the drone will take a photo of you in a few seconds. If you want to record a video, just show your hand to the drone and it will start recording. In that way, you can control the drone with only hand signals.

The FVP feature gives you a lot more than just seeing what the drone sees. It has many more benefits. First of all, you can see the Wi-Fi status of the drone which is very important to avoid losing control. When it drops to 1 of 4 bars that means that the drone is a little far and you should fly the drone back immediately.

And one more cool thing to show off in front of your friends. If you install the Snaptain Era called app, which is available on Android and iOs, you will be able to control the drone with voice control. You need to give clear commands. There are just a few things that you can do with this feature. But it’s a special ability which is introduced only on the new and expensive drones. You can also experience Gravity control and Trajectory Flight, 3D-VR and so much more. But to use the last one you will have to purchase a VR glass, which is not included of course. But you may consider buying at least a cheap VR because it provides an amazing visual adventure and outstanding 3D experience. So you can enjoy first-person view real-time live video which gives you the impression that you are flying.

This is a drone that everybody can afford who wants to buy a drone and can do so much as a more expensive or professional one can do. The only disappointing thing is the short flight time and a low range. But a more professional drone is only able to fly up 15 min so this might cheer you up. Otherwise, there is nothing to complain about the Snaptain S5C. It has a mid to high-quality camera, it has a lot of fun and useful feature, it looks good, it can be used very easily. So if you waited for a good and cheap drone the wait is over. Go, buy it from Amazon and have fun.