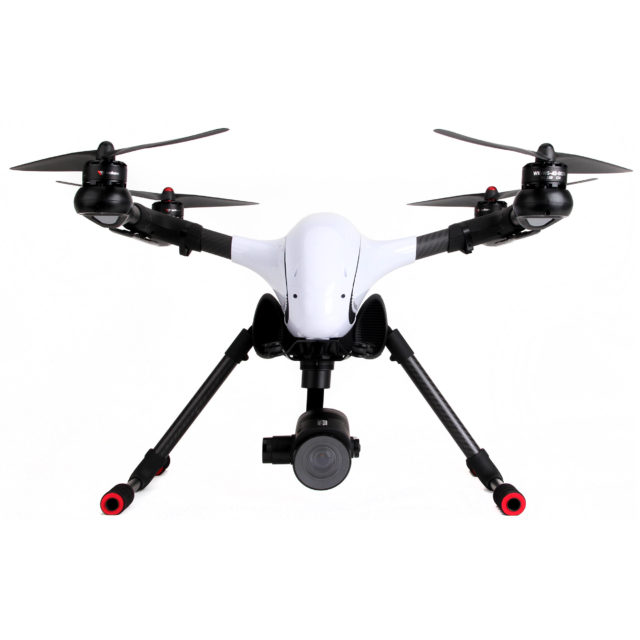 The Chinese drone manufacturer called Walkera has become a top player in the drone industry and to celebrate their twelve years of developing UAVs, they released a new generation of their successful Voyager line. The Walkera Voyager 4 has been in the media for a long time before it finally became for sale to the consumers. But the waiting was worth it. Having a price of $3,000, the drone is set to be a unique pick for advanced drone users and even for professional use. Which is understandable because it has an amazing 4K camera and an incredible 18x zoom. But let’s find out together in this review why the Walkera Voyager 4 4K camera is such a successful drone.

The drone has a really nice futuristic design. The white color suggests elegance and professionalism. The Voyager 4 share almost the same dimensions as the Voyager 3, but their design is really different. The 4 has a  more rounded design than the Voyager 3.

The Walkera Voyager 4 weighs around 3Kg. This means it needs some powerful hardware in order to make this thing fly. First of all the drone is powered by some 330Kv motors and the drone is built with 15-inch props so it can complete all the orders given from the controller.

The Voyager 4 comes with a powerful battery 6s 4500mAh. The battery has an integrated low-voltage safety alarm. So when the battery goes low, and it’s going to fall down it will signal you so that you can land and change the batteries.

The drone’s battery has a big responsibility because it needs to be used for all of the power-dependent functionalities such as the camera. A high-quality camera such as this needs a lot of computing power, so this explains why the flight time on this quad is only 20 minutes despite being a powerful battery with a higher voltage than some of its competitors.

The battery can be affected by the weather conditions because in windy weather it needs more power to fly than on a sunny, unwindy day. For instance, strong winds might press hard on the drone to shorten the flight time. To evade this, you might consider flying the drone in the absence of strong winds if you know that your cinematography is going to take quite long.

Now, this is where the real magic happens because the Walkera Voyager 4 has an amazing 4K camera. And that’s not everything, because this quadcopter has an incredible 18x zoom on its camera (only on 1080p). The zoom can be controlled from a joystick on the controller.

The camera is supported by a professional 3-axis Gimbal integrated which also eliminates vibration, so you will get a clear and stable video. The gimbal enables it to yaw about 360 degrees to take perfect and more detailed aerial footage than ever before with 4K 30fps HD image and video transmission.

Not even the GoPro cameras like the HERO3, HERO4 can achieve such a sharp and clear image. We can say it bravely that the Voyager 4 has set a new benchmark of superzoom cameras upon which others will strive to follow.

The controller of the Voyager 4 is a big and heavy one, and the controller connects to the drone with a 2.4 GHz Wi-Fi connection, and it has 18 channels. The controller feels really comfortable in your hand, it has ideal size, and it even has some rubber grips. The RC does not have a phone holder, instead, it has a tablet holder. Or to be more specific an iPad holder, because the app developed by Walkera works only on iOs devices.

With this 4G wireless internet, you can control the drone from far places that are not even visible to you, although this is not recommended. The F18 controller is responsible for all functionalities of the drone, including the zoom and angle of the camera, this all can be controlled by the radio joystick. The flight modes can also be switched by the controller.

Voyager 4 is a high-performing quadcopter, so a beginner might not be able to control it as it meant to be. Also, it can cause even some damage to the drone and environment, don’t forget, we talk about a really powerful drone. Inexperienced pilots may get stuck even in the start while trying to get a glimpse of how this UAV works.

The drone comes with various interchangeable flight modes like fly around and waypoint, etc. basically everything that a professional drone user might need. Each of these modes needs to be mastered in order to achieve the best performance of this drone.

As you can see the Walkera Voyager 4 from our review has an incredible technology that led the manufacturers to a big success. Which is understandable because the whole drone is built perfectly. The camera is just incredible, even a professional filmmaker will enjoy using it. Be aware that this is not a toy drone, it requires serious skills in order to use it correctly. So if you’re thinking about getting this drone as your first drone you better go and look for another drone.