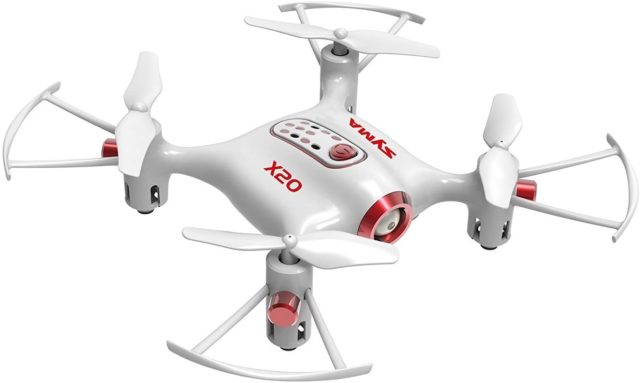 On this site, we have shown you many nano drones, like the Revell Nano Mini which is a great little toy drone. And today we are going to review another small masterpiece, the Syma X20 Nano Quadcopter.  You might ask why would anyone buy a toy drone? Well, first of all, they can be used indoors, so you can have fun with them without leaving your favorite sofa. Secondly, due to their small price, they can be collected and used at the same time. It’s true that you won’t be able to take any sharp photos or videos with it, but you can fly a lot with them. Or they are also good to learn how drones do work.

The SYMA X20 is a very small, toy-grade drone. It measures only 10.5 x 10.5 x 2.5 cm with the prop guards on and weights only 22g. Overall it’s a really simple drone, with only a few inscriptions on it. The build features also include non-removable prop guards, power buttons, and foam landing pads. The drone can be purchased in two color options: black or white. Both of them have red and green LEDs on the bottom so you can identify it’s orientation and it’s the position in the dark.

The drone can be turned on with the power button on the top, just hold the button down for a couple of seconds, and when the lights turn on, you know it’s turned on. The same thing is applied when you want to turn it off. These power buttons are the trademark of SYMA because they use the same design for all of their quadcopters. The prop guards work very well, they can’t be removed, but they are slightly flexible, so they won’t break so easily. It can survive a few crashes but doesn’t test its limits.

Just like the drone itself, the transmitter of the SYMA X20 is a really small device compared to other drone controllers. But it’s not too small, it fits just right in your hand, and all the buttons are easy to reach. The controller looks pretty much like a Nintendo 3DS controller, the layout and the control sticks are very similar. It has a unique control stick style and an easy user interface. In regards to the layout of the controller, SYMA has made it very simple because it has only 3 buttons. One for flips, one for changing speed/entering the headless mode, and one unused button which is used for the camera version.

The flight performance of the Syma X20 is pretty impressive, it won’t be able to win drone races, but that’s not why you would buy this drone. When I say it’s impressive how it flies I’m referring to things like it holds altitude precisely, responds well to the commands, and has a good flight time for the size.

Usually, you would fly your quadcopter outdoors but since this is a small drone with a relatively weak motor it’s better to use it indoors. However, if there is no wind or rain outside, you can use it there as well.

The drone is ideal for learning the basics of flying a drone because there are 2-speed modes, so you can start using the drone at an inferior speed mode, and when you get into it, you can switch it onto a higher speed. My advice is that if you use it indoors, use it only on the lower speed mode. It might surprise you but this little drone also has an auto-landing/takeoff feature that works great. Most of the time drones in this category don’t have this feature, but the manufacturers have taught about everything and they implemented this feature for us, to give a better user experience.

To use the auto takeoff you only have to press the 2 top shoulder buttons until you hear a long beep and your quadcopter will automatically fly to about 5 feet. The other very useful feature on this drone is the altitude hold which also works great. Loss of altitude while moving is a frequently occurring problem on these smaller drones, but luckily the Syma X20 doesn’t have this problem. The drone also has a flip mode, which isn’t something useful, but it looks cool. To do a flip all you have to do is press a button and give me direction for the drone on the right control stick.

Due to the small size of the drone, it only has space for a small battery, which results in only 5 minutes of flight time. When the battery is getting low you will get an alert, after the low voltage warning you have about 30 seconds before the quadcopter loses power, so make sure you land it in time.

Overall the SYMA X20 nano from our review is a nice, small, and cheap quadcopter with some features that you can’t usually see on these toy-grade drones. It has a relatively nice flight performance, great design, and a small but unique transmitter. It has some features that will help in the process to learn how to fly the drone, like altitude hold and auto take-off and landing. So after all, if you’re looking for something small and cheap to fly, or if you’re looking for a new hobby I recommend picking this drone.

If you’re interested in purchasing the Syma X20 Nano quadcopter, check out Amazon, and Bhphotovideo.