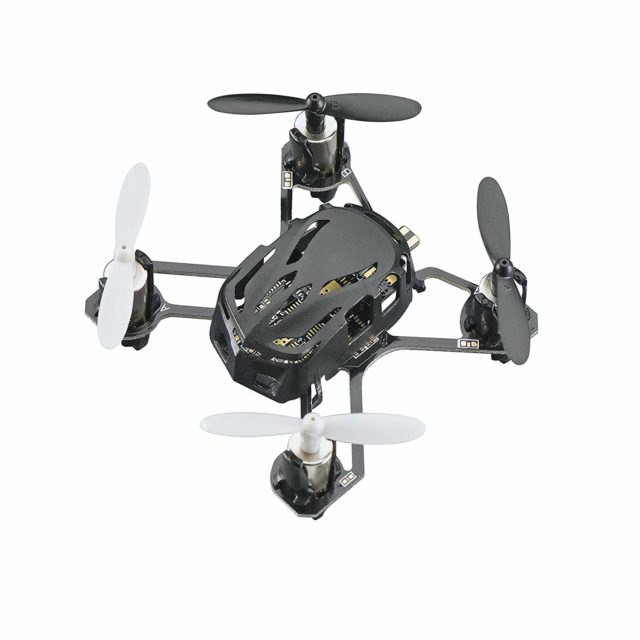 Everyone heard the question “Does size matter ?”. In certain cases the answer is obvious. But how important is the size in the case of a drone? Only big drones with even bigger price can bring you joy or you can have fun with even a smaller one?  These are the questions everyone asks themselves, at least all the geeks and gadget maniacs who love drones. A bigger drone can do a lot more than a smaller one, this is clear. It’s way more intelligent, has a better camera and you can show off with them. How much fun can you bring you a really small drone? But the more important question here is that it is worth the 30$ for the Estes Proto X Nano drone or you should obtain more money to get a better drone? Stay tuned because after reading this Estes Proto X Nano Quadcopter Review you will have the answer for all of your questions.

Now we know that the drone costs around 30$ but what do you get exactly for this money?

The Estes company is really specialized in nano drones. They bring nano drones to the market in all shapes and sizes. They are all small-sized drones but they can be really different from each. For example, the Estes Proto N is from the same “family” and category as the Estes Proto X but they look really different. They take care of your need to find the drone that matches you the best.

Anyhow, due to its small size, the drone doesn’t have many characteristics concerning his design specifications. The drone is from a single piece, two rotors on the front and two on the back. With this size, it’s one of the lightest quadcopters in the world with a weight of 0.4 oz (11.3 g). It has some minimal design on the top, a few small holes that give him a sporty look.  With the package, you get four spare rotor blades with the drone, eight in total. You’ll have four white and 4 black blades, and you can play with these however you wish.

You can’t take out the battery, so you don’t have the possibility to change the batteries. Therefore, you have to wait every single time for the drone to charge up which takes around 30 minutes. With one charge you can keep the little aircraft in the air for around 10-15 minutes. When the battery is running low the LEDs on each side will start to flash rapidly. This is useful because you don’t have any other safety measures that ensure the safety of the drone when it’s running out of battery.

The best way to describe the flight experience is by imagining that you control a bug. It’s small and makes small noises just like a little bigger bug. Luckily it’s built with LED’s and you won’t confuse it with a real bug. Those lights also help you to define the position of the small aircraft.

In some cases, the manufacturers highly advised not to use a drone inside, because it can cause major damage in your decorations and in the drone too. Well, in our situation the manufacturers highly advise using only indoors. The drone can’t cause any bigger damage. But when you use it outdoor any smaller wind can throw it away causing damage in the drone. However, you can try it to use outside as well, but be sure that there isn’t any wind out there. The drone can fly at a distance of 30 meters and can take up a speed of 0.05 meter per second. This is a little less impressive but for and indoor nano drone you don’t really need much.

Besides all this, the drone is quite compact and durable. It survived major falls and blasts. The most vulnerable part of the drone is his rotors that can come out easily in a crash but you can put it back even easier.

Using the remote control is quite easy you have a left stick for altitude and rotation, right stick for direction, plus a couple of buttons to adjust the trim and it also has an internal built-in gyroscope that keeps it flat and steady while the little electronic bug is in the air. The small size of the drone helps it to be more responsive to commands.

“I purchased the Estes Proto X Nano Quadcopter for my son. He has owned a few of these small copters but they were of the cheaper variety and lasted only for about a month before they crashed, the propellers broke or the remote failed to respond.” – Ray

“I received my proto-x very fast and it flies extremely well I thought it had a charging issue at first but it was me being stupid. This one flies super smooth and is not jittery the newer one I bought kinda jitters in the air and one of the motor holders broke really easily”

“This is a tough one. It’s a very good little nano-drone. HOWEVER, do not think if you are an absolute beginner that you will be able to fly this thing right out of the box. I am an intermediate quad flier and an excellent chili flier and I had a pretty big learning curve. However, once you break the curve (and a couple of the propellers you are in like Flynn. I would say only adults will be able to learn how to fly this thing” – Adam

I think the best way to describe this “It ain’t much but it’s honest work”. The drone can’t do more than basic movements. It doesn’t have a camera, a strong motor or any flight mode. But it’s really durable and responsive to every command. The main goal of the manufacturers wasn’t to make the most extraordinary drone, they just wanted to make a small long-lasting. So they gave attention to the details, therefore I think that this drone is worth every cent. You probably won’t use it much, but that will be because you will be bored with the drone, not because the drone broke.

If you’re interested, check out the prices on the following links: Amazon and Bhphotovideo.