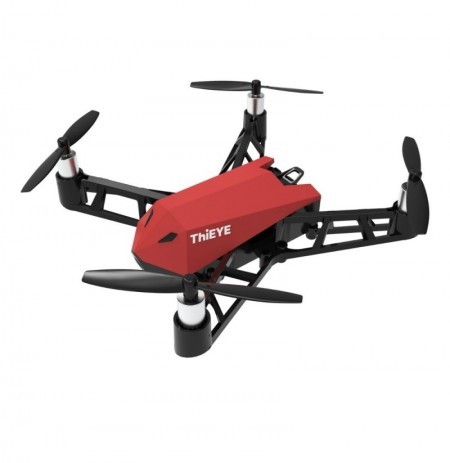 I believe that every person on the Earth knows the feeling when you underestimate someone or something. Just because at first look we might think from something that it’s not good enough that doesn’t mean we’re actually right. And the Thieye Dr X quadcopter is the perfect example of this as we’ll show in our review. We tend to think about small drones that their flight power is small, and they have a bad camera. And usually, we’re right, but not in this case. I’m not saying that it has one the best performances among the drones, but it really performs better than the other drones that are in his price and dimension rate. If you don’t believe it, follow me in this Thieye Dr. X Quadcopter Review and you will see it.

The manufacturers thought that it would be a good idea not to give a Remote Controller to this drone. Well, I totally disagree. Because it doesn’t matter how big or smart it is, it will never give you the same ergonomic touch as a  real controller does. You can’t feel the buttons, and you always have to make sure your fingers are in the right place. Also, if your phone doesn’t have a certain frequency then the signal might get lost and you lose your control over the drone, luckily this app needs only 2.4 GHz in order to be able to control the drone.

This is good because almost every phone will be able to control it, but the part is that it will let the drone fly 50 meters apart from you. The only good part about it is the fact that it doesn’t require you to always carry a controller with you, you just have to grab out your phone from your pocket, and make sure that it’s charged up.

The app can be downloadable and usable for any kind of device, it doesn’t matter what kind of operating system you have on your phone. The controls on the apps are really easy to configure so you will surely find the interface that will suit you the most. You can set the control mode on your phone into Joystick or Motion-Sensibility mode. Also, you can set the joystick habit into two different modes, one of them is the American Habit the other is the Japanese habit. Basically this sets the placing of the joysticks. After you connect the drone with the app you will have some basic telemetry info on your screen, like the strength of the signal and the battery level on your devices.

The 650mAh battery of the drone is charged via a micro USB port which is in the back of the drone. Be careful because in order to charge the battery you have to power the drone first, otherwise, it doesn’t charge at all. The battery will let the drone fly for 7 minutes. Consider the fact that this is a very small drone and you don’t really have space inside the drone for a bigger one.

Besides the fact that we talk about such a small drone, it has a surprisingly good camera. The Thieye comes with a 1080p camera, there are drones out there that comes with a bigger kit and bigger price but has only a 720p or a 480p camera, which is clearly not enough for anything. But with a 1080p camera and some skills, you can provide really good and interesting footage for yourself and your social media page. All the footage is saved on a micro SD card which has to be inserted in the back of the drone next to the charging port.

Usually, you don’t expect much from a drone-like this, but this one is acting surprisingly well. Not just it stays stable in the air and responds very quickly to your commands but it also has an optical flow system to help the drone to keep his altitude. This feature along with the motors makes the drone able to hold its position even in a stronger wind.  The drone has a 360 degree rotate mode, which is not an orbit mode, it just stays in one place and will make a full turn, capturing everything that surrounds the drone. Also, you have auto take-off and landing so you can start the flight with just one click.

You can switch between 2 different speeds on the drone, a low and a high one. The Low speed is more for indoor flight because there you have to be more careful, and also the obstacle senses work better at a low speed. The high speed is better for outdoor flight, where you don’t have many obstacles that can damage your drone.

Also in the setting, you can choose between 2 flight modes, one of them is the selfie mode, which makes the drone always facing you, therefore you can make awesome shots about yourself without maneuvering the drone too much. And the other flight mode is the aerial mode, this is for the fewer egocentrics persons because in this mode the drone’s tail will face the operator, a.k.a. you.

The Thieye Dr X Quadcopter from our review performs pretty well, it has way better specs than I expected. Of course, the range and flight time is ridiculously small, and you won’t be able to make the best cinematic shots with it, because of that. But the camera performance is quite good, it can take good photos, and even good videos if you manage to fly the drone smoothly enough. If you want to start a new hobby by buying a drone, this could be a good start, and if you got into it you can always buy another, bigger, better and stronger drone. But for practice this aircraft is perfect. If you’re interested in purchasing the drone you can do it on the official website.