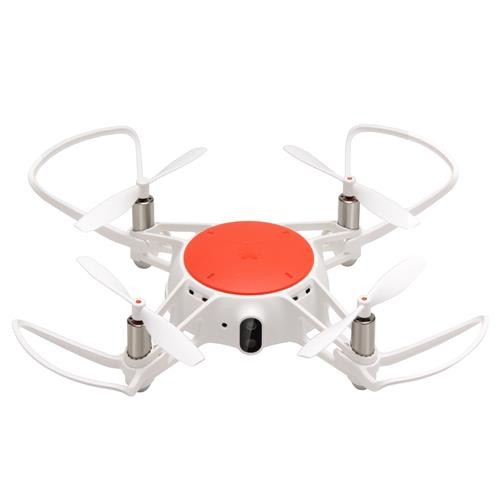 Xiaomi is present in the drone industry for some time, and with each drone, they have better and better attempts. One of their latest drones is the XIAOMI MITU. It’s a beginner drone from all points of view.  It has a short flight time, not the best camera, and a lot of safety features. The recommended age for the drone is 14 years old, but I think this would be a perfect gadget even for your younger child if he or she is passionate about such gadgets. The MITU is a competitor for the DJI Tello, this article won’t be a comparison between the two. It’s up to decide which one you prefer more. But for that stay with us through this Xiaomi MITU Mini Quadcopter Review.

The MITU comes with a size of 91 x 91 x 38mm and very simple and clean design. The weights are around 88g so there is no need for an FAA registration because it’s a very small drone. The overall frame has an oval-shaped body in white. Just like any other drone it has 4 arms and propellers also in white. In the middle of the drone, there is the place for the battery which has an orange cover. In the box, you will find a propeller guard which could be really useful if you’re a beginner, don’t be ashamed put ‘em on.

The battery that comes in the package is a removable 920 mAh Lithium-Ion cell battery.  As I said before this is the orange disc seen on top of the drone. The battery lets you fly for 10 minutes which is slightly above the average time for drones in this price and size category.

MITU can be controlled via Bluetooth and the controller, or via Wifi and your smartphone. However, controlling it with your phone can be a bit more interesting. It allows you to adjust settings, access features, record videos and take photos. But it could be difficult sometimes to touch the place where the joysticks are supposed to be. If you want to use it with a Bluetooth remote controller you have to buy that separately.

The camera that you can find on this drone is capable of recording 720p HD video at 30fps. It is also capable of transmitting live video transmission a.k.a. FPV to your mobile phone. In order to do that you will have to download the app on your phone. Unfortunately, the camera doesn’t have any software or hardware image stabilization so even at the slightest movement your image will be shaky.

But that’s not everything the MITU is capable of doing because it has altitude hold as well. With this, you can make steady videos and photographs. Another feature that you can find in the MITU is the Headless Mode, with this, you don’t have to worry or to mess with the orientation of the drone because it can fly in every way. It’s a useful feature if you want to film a specific still object. It also has the ability to do a 360° flip in 4 directions, it’s not the most useful feature but it can be fun. And of course, it has auto take-off and landing as well. Also, to be perfect for beginners it has some safety features like if the battery is running low the drone will automatically land.

The app for the Xiaomi MITU Drone has fairly nice features. First of all, it gives you the possibility to set geofences like height limits.  Also, if you don’t like the interface you can slightly change the control layout. It also gives you alerts about the status of the drone’s battery and will let you know if there is an issue with the drone.

The feed from the video camera is displayed on-screen in live, with the controls alongside. A cool feature on the app and a byproduct of the FPV streaming is that the photos and video are taken from the drone can be saved directly to your phone, instead of saving them on the built-in 4GB in the drone. It’s that this makes it less of a hassle to transfer the photos and videos, but if the connection is weak between your phone and the drone the videos could be glitchy. So take your time and choose the drones’ internal storage.

Overall, the Xiaomi MITU quadcopter from this review is a solid device for beginners and people who desire to have the ability to fly around their house, taking videos and photos of the cat and dog trying to catch it. Jokes aside, this drone provides remarkable stability if it’s used under proper circumstances (no wind, rain, etc). All of the features on the drone are easy to execute. Everything works well, and the drone is very capable and quite fun to fly around.