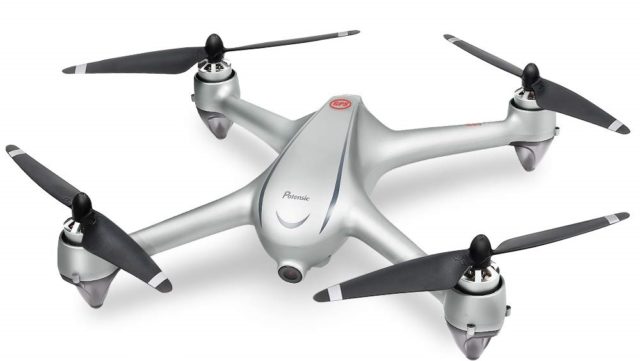 The past few years were something amazing for the drone enthusiast people out there. 2018 marked the year when the Mavic 2 was released along with the  Parrot Anafi, Autel Evo, and other great drones. Since then 2 years have passed, but in this short time the drone industry continued to evolve, drones are cheaper and have better qualities. And Potensic is keeping up with the evolution of the drone industry. That’s why they released the Potensic D80 Quadcopter, a nice and stylish drone, with a 2K camera, and some handy features that we’ll review in here.

About design and construction, the drone has a solid build, therefore it’s not foldable. But it’s still small enough to transport it in a proper carrying case (that you get with the package). It measures 41x41x8 cm and weighs somewhere under 450g, so you’ll need to register it. The drone has an X shape, it’s front arm being ahead of its front side and camera. It has a nice light grey color which is completed with some nice dark grey touches.

Overall it has a pleasant visual aspect. At the end of each arm there is a LED light (green on front and red at the back), this isn’t only just to look cool, but also to identify the drone’s position in the dark. However, I would recommend you not to fly it in the dark, the sensors on the drone are weak and you won’t be able to make proper images. The LED lights also indicate whether or not the drone needs to be calibrated.

The drone comes with brushless motors. These are some really powerful motors that can give a nice boost to the drone, which can gain a speed of 25 mph. I talked a lot about how useful the brushless motors are. They require minimal maintenance and still are very reliable. Not to talk about their strength and the fact that they don’t overheat that fast, and they are way quieter.

Just like the drone, the controller is a solid piece of equipment. It’s quite bulky but still fits right in your hand. There are some switches and buttons on the controller along with the joysticks, but everything is enabled with small icons so you can learn in no time about the purpose of each button. At the bottom of the controller, there is a small LCD screen that shows you a lot of important telemetry information along with the battery status.

The controller can give a 600 meter of distance from the controller to the drone. This is a decent amount of range, which should be enough to take nice images of landscapes and events. The drone is also enabled with the dual-GPS feature, which can guarantee you a safety auto-return feature when the power goes low or the signal goes weak.

The controller has a phone holder as well because the drone can offer an FPV view, where you can follow the live feed of the camera. The phone holder is adjustable so even the newest and biggest phone can fit in.

The battery of the Potensic D80 will give the drone an impressive 16-20 minutes flight time. The flight time can’t be properly determined because the flight time can depend on a lot of things like the weather, temperature, your flight time, etc. However, this is still a good time, drones like the D80 in this category, and price range usually have 12 to 15 minutes of flight time.

The battery is a 7.4V 1800mAh Li-Po battery, which is totally safe and it’s easy to insert or remove. Still, if the given time it’s not enough for you, you can buy a separate battery to double the flight time. The charging time is a bit long because it takes 5 hours to be fully charged, so it will be better with two batteries, and always keep in mind to charge the batteries in time.

The main reason why we choose our drones, the camera. Regarding the camera, the Potensic D80 is a great choice, because it comes with a 2K capable camera. Unfortunately, the camera is fixed, so you will have to move the drone itself precisely to get a nice view. But at least it has a 120° field of view, with a fisheye effect, so you get a pretty wide image.

As I told before, the drone has FPV for phones, but it can stream only in 720p, while the footage on the memory card can still be in 2K. However, in 2K the video will have a low frame per second rate, so I would suggest you reduce the quality to 1080p, you will still get a nice quality and the footage will be more enjoyable.

Besides the fact that it flies really well, and responsive. It also has some autonomous flight options that will make your time with the drone so much easier. One of them is the headless mode, which will make this drone fly in any direction. This is a very good feature, especially for beginners. It also has waypoint mode, so can plan the drone route that you want the drone to follow on the smartphone. This leaves your hands free and assures that the drone will go flawlessly.

But the most used one will be the one key landing and takeoff button. This is like an auto parking feature for cars. Once you press the button, the drone takes off immediately safely, or if it’s on the ground it will rise to a height of 15 meters and hovers there.

The Potensic D80 Quadcopter from this review proved to us that they can still make nice and enjoyable drones with good features and specs. The flight time and range is just as good as the other drones in his price range if it’s not better. Overall it’s a really enjoyable little drone that can offer you a lot of fun and can save your best moments from an aerial perspective.

If you’re interested in purchasing the Potensic D80, you can check out its price on Amazon.