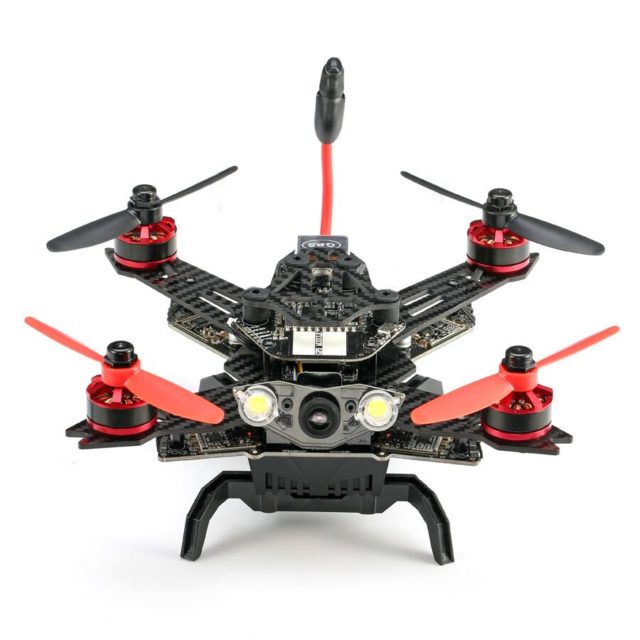 If you want to upgrade your toy quadcopter to a more serious racing drone you’re in the right place. The new Eachine Assassin 180 Quadcopter that we’ll review in this article is an absolute beast with a great user experience for every drone enthusiast. It’s a low-cost, ready-to-fly drone with a racing system that is great for both new and experienced racers. And not just that, to show how much they care for their users, in the package you will get a pair of VR glasses, beside all the basic parts you would usually get with a drone.

Maybe not all you have heard about Eachine, who is a relatively new producer on the Drone market. But only in the past few years have they released some amazing drones like the Eachine BAT QX105  which is a great little racing drone, and the Eachine EX4, an amazing camera drone, featuring a 4K camera. Not to forget that they are also producing FPV goggles, which you can try out if you buy the Eachine Assassin 180.

The Assassin 180 has all the latest features that a drone in his dimension should have. This includes the GPS system, barometer, and the FPV view. These may not be something new and unique, but racing drones have these features really rare. Also, you can get these technologies for a much lower price, than a few years back.

The on-board camera streams  a real-time video feed. However, it’s not the best quality you can get, the stream will be a little lower resolution than other FPV systems. However, you will still get a good FPV view, that will make your flight experience even better. Also, the drone is built with some extremely bright LED headlights that makes it possible for you to fly even in dark environments. Also, you can find your drone easily this way.

The signal from the FPV system can go a few hundred meters away from the controller. However, when you fly the aircraft in a more crowded environment, with a lot of signal from other devices you should expect a lot of static in the FPV view.

The drone looks like a regular racing drone. There is a lot of technology in a tiny space, without any plastic shell on it to cover up the hardwares. It has a sturdy build that will survive most of the crashes. It may have a broken propeller or leg, but nothing crucial will happen with it. As for the size, it’s diameter is 180mm, and it weights 288g, so it’s a small drone.

The drone comes in a carrying case that is really well designed, with a solid outer shell and a really nice set of foam compartments for the different parts. It comes in a compact design, and the whole package can be assembled in about five minutes. The assembly consists of installing the rotors on the motors, placing and screwing the FPV antenna onto the back of the aircraft, and placing a piece of plastic cover over the two wires from the receiver.

The drone can be programmed, but it’s already pre-programmed and ready to fly. You can connect to your computer with a built-in USB port that allows you to reprogram the NAZE 32 flight controller processor. It supports base and clean flight features, but overall you have many more options when it comes to tuning the aircraft. If you’re a beginner wait till you develop your own style..

The drone is more stable than you would expect. The drone is very small with some powerful brushless motors, so you would expect it to be a bit uncontrollable. But the gyro, compass, and accelerometer are all very well-tuned and they work really well. The drone has three flight modes: standard flight mode, exponential flight mode, and altitude hold mode. The altitude hold mode is powered by a barometer that measures air pressure and keeps the drone in his place. Although it works, it could be a little more accurate. The GPS system isn’t super impressive. It finds the satellites kinda hard, and it took around five to ten minutes to find enough GPS satellites to work properly.

The drone is small, so it can bear only a small 2400mAh battery, so there won’t be any shocking news that it can fly for only 8 minutes with a single charge. But luckily you get four of these batteries, which means that you will get approximately 32 minutes of flight time. The FPV works really well in the dark. The flash lights are doing their job, and they are handling the low light conditions very well.

This Eachine Assassin 180 Quadcopter is designed for someone who wants to have a racing drone as shown in our review. The drone has a low-quality camera, and can’t even record videos, so consider buying the drone by knowing these facts. You could put on a sports camera on it, but there is very little free space on the drones platform, and the flight time and performance could drastically decrease. So it would best for you not to add anything on the drone. Other than this, the drone works really well, with the provided FPV goggles you can get a really good flight experience.