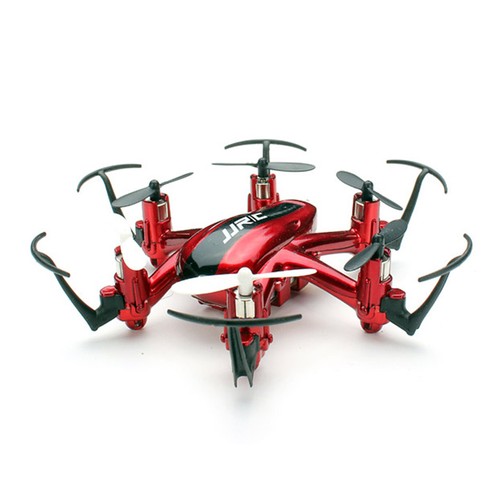 The JJRC H20 Nano Hexacopter is one of the most fun nano drones on the market as you’ll see in our review. It’s very small so you can bring it anywhere you want, and due to the 6 motors, it’s incredibly stable. Beside this JJRC have always designed their hexacopters with the beginners in mind. So their JJRC H20 Hexacopter Drone with six-axis gyro is a piece of art for the beginners. Other then this we should mention it’s cool look as well, let’s be honest, you don’t see that many people flying a hexacopter nowadays. It’s true that it doesn’t have a camera, so the only purpose for these drones to fly it. But for the money you can get it, it can give you one of the best entertainment sources for its value.

The JJRC H20 is a bit smaller than an average drone. It has a stylish minimalist design, which makes the drone look like a toy.  The drone can be purchased in two different colour options gold/black and red/black. Due to its small size, it’s easy to lose it, but whit this colour options you should find it easily.

The JJRC H20 was built with durability and the protection of your home in mind. The blades are made from plastic so that they don’t break easily if they hit something. They are also surrounded by propeller guards which will protect the drone and your items if you manage to hit something.

Under each arm, there is an LED light placed. These lights light up in red and blue. This can help you to keep the quad in a forward position through the air even in the dark.

The battery for this drone is a 3.7V 150 mAh. A battery like this gives around 5 to 7 minute of flight time. Which is pretty much for a small drone. There are bigger racing drones that allow only 2 or 3 minutes of flight time.

The battery is placed on the bottom and it’s a removable battery. When you charge the battery, which takes around 30 minutes, make sure to always use the provided USB cable so that you won’t damage the battery or another cable.

The JJRC H20 comes with a 2.4GHZ remote controller that is made from plastic and has a white and blue colour. A 2.4GHZ band makes a more accurate and strong controlling while your drone is in the air.

The RC for this drone is a simplified version of other manufacturer’s RC systems. But the main goal was to be designed in a way to allow beginners to understand the controls as easy as possible.

The remote controller with three triple-A (AAA) batteries of 1.5 Volts. They are not included in so you’ll have to buy it yourself.

There are two short blue joysticks which are responsible for the control of the drone. A blue switch on the middle has to be pushed left or right to turn your controller on and of. Above this is another switch that enables you to go forwards and backwards with the drone.

When you push down the left joystick you enable the headless mode. This makes the drone turn in the direction you are. If you push the right joystick down you get your drone to automatically return and land to it’s starting position.

The JJRC H20 hexacopter does not come with a camera. And due to its small surface, you can’t even attach one on the top a sports camera or a small wireless one.

On other small drones like the HolyBro Kopis, there’s enough space to attach a camera like GoPro on the top. And also, the motor was build in such a way so the drone would be able to lift that extended weight.

The JJRC H20 has multiple speed options. So when you fly it in a more crowded place you can start using it in a slow speed, and when you use it in a more open area where it’s nothing that you can damage, you can unleash its full potential.

The six-axis gyro plays an important part in the build of the JJRC H20. A gyroscope is used to detect changes in the positioning of the drone. As it flies in the air it can sense when the drone tilts in a way and it tries to balance it, so the drone will stay stable. Most of the drones have only 4 gyros, but this one has two more, so you can fly your drone safety as possible.

The JJRC H20 Hexacopter from this review is very fun to use. If you just want to try out how does it feel to control a drone, or just want to make it as a cool gift it’s a perfect choice. You can learn on this thing the basics of the drone. This drone doesn’t have a camera but it has other cool features like the 6 arms and the 6 axis gyros which provides more stability. And some features like the headless mode and the one-key return. If you decide to buy this drone make sure to read the users manual or at least run through the images. You will be surprised by how many things this drone can do.

If you want to purchase the JJRC H20 check you can do it on Amazon (Gold, Red), Banggood and Geekbuying.