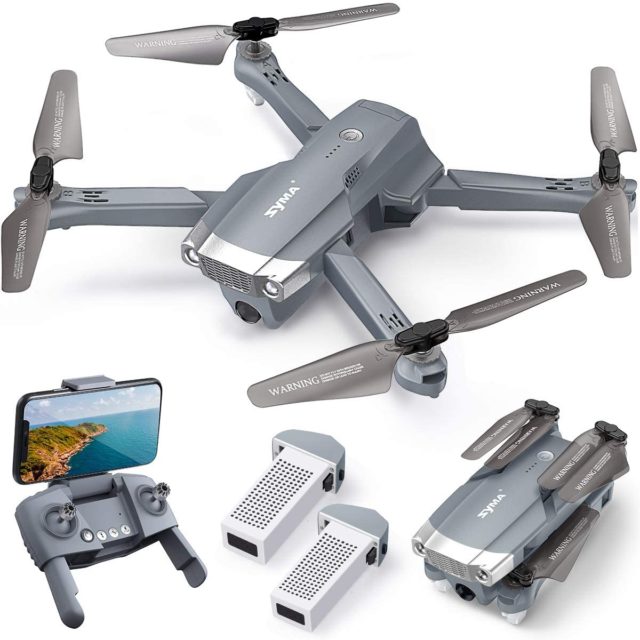 The Syma X500 quadcopter is a well-designed foldable drone that looks just like a high-end drone as you’ll see in this review. I can tell you now that it’s really cool and comes with some very good features. You can get this drone for a low price, and don’t forget that we talk about a GPS drone that also has intelligent flight modes and including the automatic return home feature. But we all know that in a drone the most important thing is its camera, and this drone won’t disappoint you because it comes with a clear HD camera. And the flight time and range also won’t disappoint you, but we will talk about that later.

The Syma X500 is very small and lightweight drone. It has many similarities with the DJI Mavic Mini. Both in his design and characteristics looks like the Syma X500 which is a good thing. The Syma X500 weights less than 250g, which is a good thing because you don’t need to register it to the FAA. But there might be some other rules in your country. So make sure you know them before flying the drone and getting a penalty. The drone is lightweight and it’s a foldable one so it was designed for travels. Therefore no matter if you’re going on long hiking or a chill city break, you can bring easily the drone with you.

As for the design, this quadcopter is really on point.  It has a nice silver colour and some foldable arms. On the top, you can find the power button and the brand logo. The coating is made from strong ABS plastic which is durable but light. And on the body, there are some air vents as well, for better aerodynamics. The drone comes with brushed motors, which is a bit louder than a brushless motor, but it can do his job pretty well.

And last but not least, the drone comes with some LED lights. These are placed under each motor, so you got 4 of them. The front ones are green, and the two on the back are red. This what you won’t just know where is your drone, but you will know it’s orientation as well.

The drone works with a 7.6v 1700 mAh lithium polymer battery. A battery like this can make the drone fly for 25 minutes. Depending on the conditions, like the weather and your flight style, this can be even less. But the good news is that you get two batteries with the drone, which means that you can fly it up to 50 minutes. The battery is a modular battery that can be changed easily, and it won’t mean harm to anybody.

Just like the drone itself, the controller too lokes like one from DJI. But it’s still different somehow. Overall it has a minimalist design and a foldable build. The maximum range of the drone is around 350 meters, and for the FPV its only  200 meters.

The controller is foldable on the bottom so you get a nicer touch. And on the top, there is a foldable phone holder, so when you enable the FPV you can watch the live feed from the camera and the buttons at the same time. On the front, there are some buttons, but they are easily identifiable because they all have symbols on them which makes it easier to learn their purpose.

To enable FPV and the smart feature, you’ll have to download the app. These can’t be accessed from the transmitter. The app is available for both Android and iOS devices. Like most of the cheaper drones, this drones app has some bugs sometimes. The live FPV can freeze sometimes, but that doesn’t affect the footage because that is stored mainly on an SD card.

Cameras are the main reason’s we love drones. It’s worthless buying a drone with a low-quality camera unless it’s a racing drone, but that’s not the case. This drone comes with a 1080p camera. There are many more expensive drones that can shoot in 4K, but even those who shot videos in 4K, most of the time reduces to 1080p to be easier to work with and to be optimized for most of the laptop screens and phone screens.

That’s why the 1080p is perfect for daily use unless you’re not a professional. The camera has a bit of fish-eye effect, but that’s okay for a sports camera. Also, the angle can be adjustable so you get the best angle for your shots.

The resolution on the stream has a 720p quality. But the footage saved on the SD card will be saved on the original preset quality.

The pest part regarding the performance of the X500 is the fact that is a GPS drone. This makes the drone more accurate when hovering or when you’re using different flight modes. But besides that, the drone also has an optical flow sensor on the bottom to help stabilize the drone.

As for the intelligent flight features, it has all the essential ones like a waypoint, orbit mode, and follow me mode. These are some essential autonomous features, that could be really helpful when you want to record something more artistic.

The Syma X500 Quadcopter from our review might be the perfect drone for beginners. Basically, it’s like a demo version of a more complex drone. You can learn with it the basics of a flight, and capturing videos with a drone, while still having nice features like pretty long flight time and some handy intelligent flight options. So if you wish to start a new hobby in the drone world, I would recommend you to start with a drone-like this which is cheap but still able to do a lot of things.

If you’re interested in purchasing the Syma X500 you can check out its price on Amazon.